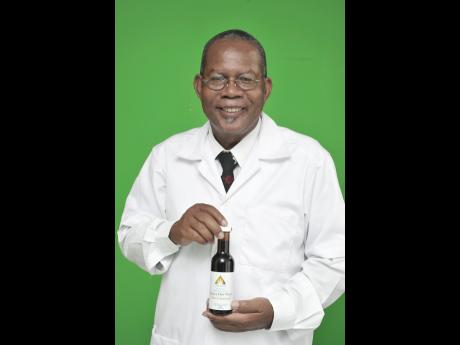 Dr William Lawrence shows off a sample of his guinea hen tonic. He and his US-based partner have now obtained a patent for an anti-cancer formulation from guinea hen weed.

Dr Lawrence Williams, adjunct professor in the College of Health Sciences at the University of Technology, says he and his business partner have obtained a United States patent for an anti-cancer formulation based on the guinea hen weed.

The Jamaican scientist says he now expects to make headway on a buyout offer that he has spoken of for at least three years, but is yet to finalise with business partner PG Pharma LLC, based in Michigan, United States.

The patent is the end stage of 28 years of research into the indigenous guinea hen weed plant of Jamaica, scientifically known as petiveria alliacea. It is shared with co-researcher Dr H. George Levy, who owns PG Pharma.

This company has already been instrumental in financing costs associated with securing the patent, which was approved on May 30 of this year and assigned in the name of the two partners.

Several stories have been written over the past few years on a buyout offer of US$100 million, but Williams says the talks before were basically "preliminary discussions", and that more serious negotiations were about to get under way when his partner visits.

"The discussions for that will be in August," he said.

He notes, however, that while he will be going after the best price offer, he is also willing to entertain an offer from the Jamaican government.

US patent No. 9662303 B2 describes the guinea hen formulation as providing a compound for treating cancer, including an isolated form of dibenzyl trisulfide or DTS an agent against human diseases, including various forms of cancer.

The patent says the discovery has implications for several cancers and degenerative conditions, including Alzheimer's, Parkinson's, transplant rejection, autoimmune disorder such as diabetes, acquired immune deficiency syndrome and Hodgkin's lymphoma.

Williams says he and his partner have 35 testimonials on record related to use of the formulation.

Williams said he and his partner have made no projections on the cost of formulating a drug from guinea weed, but the scientist notes that the plant is very easy to grow.