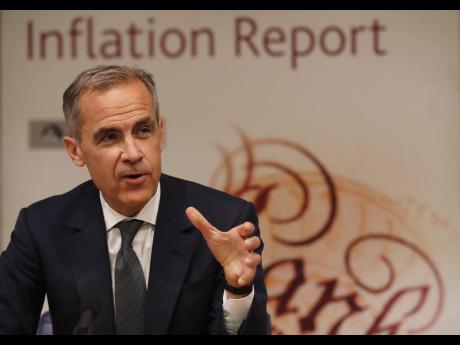 The Bank of England kept interest rates on hold Thursday as it cut growth forecasts for this year and next, saying that it expects the economy to remain "sluggish" as household incomes are squeezed by inflation that followed the Brexit vote.

The bank's Monetary Policy Committee (MPC) voted 6-2 to keep rates at a record-low 0.25 per cent amid uncertainty about Britain's economic prospects when it leaves the European Union in 2019.

The central bank cut its estimate for economic growth this year to 1.7 per cent from the previous estimate of 1.9 per cent, and to 1.6 per cent in 2018 from 1.7 per cent.

Bank Governor Mark Carney said companies are reining in spending because the details of Britain's future relationship with the EU are still unclear, even as consumers tighten their belts because the pound's weakness has made many imported goods more expensive. Negotiations between the two sides are in their early stages, with differences over immigration and financial obligations threatening Britain's goal of retaining access to the European single market.

Brexit uncertainty "weighs on the decisions of businesses and households, and holds down both demand and supply," Carney told reporters after the bank released its quarterly review of economic trends.

The pound fell 0.7 per cent to US$1.3132 in early-afternoon trading as the prospect of slower economic growth damped expectations for a rate increase in the next few months. The currency had risen to an 11-month high after the MPC's previous meeting, when three policymakers voted to raise rates.

Some economists had called for a rate increase after inflation accelerated to 2.9 per cent in May, well above the bank's target of two per cent. But the rate dipped to 2.6 per cent in June, easing pressure for a rise.

While rates are on hold for now, the bank warned they may eventually rise more quickly than markets seem to expect. For example, Howard Archer, chief economist of the EY ITEM Club, has predicted rates will rise to 0.5 per cent by the third quarter of 2018.

"If the economy follows a path broadly consistent with its central projection, then monetary policy could need to be tightened by a somewhat greater extent over the forecast horizon than the very gently rising path implied by the market yield curve at the time of the forecast," Carney said.

But as with many things in Britain these days, the spectre of Brexit overshadowed everything. The bank's outlook for growth, inflation and consumer borrowing are all contingent on the government's ability to negotiate a divorce settlement that minimises any disruption to trade and investment.

"Strong words from Mr Carney," said Aberdeen Asset Management chief economist Lucy O'Carroll. "His main message is that interest rates will have to rise in the next two years because of the damage Brexit is already doing to the economy."