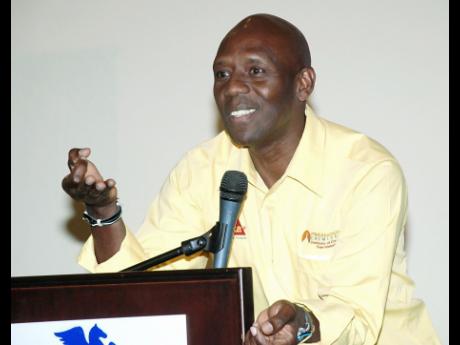 The lubricants company, traditionally a distributor that is branching out into blending, made annual profit of $101 million. That's down from $183 million at year end May 2016.

"We have investments, both in human resources and in the new lube plant, that we're doing. So effectively, you will see an increase in not only the physical resource, but the human resources as well," Graham said.

Paramount Trading and Allegheny are developing a lubricant plant for blending of the Altra brand owned by the American company. The US$4-million plant was initially to be commissioned at the end of 2016. It's now expected to start operations in October of this year.

A testing lab that was included in the project is already operational.

"We really need to put in these infrastructural and technological upgrades to take on the requirements of operating in a different space with this new partnership," said Graham. "While you may not yet see it in our bottom line, the truth is that the money is there since we've made the investment."

Paramount grew revenue last year, but only marginally, from $1 billion to $1.5 billion, but expenses linked to the plant and new staff for the manufacturing facility and lab, along with equipment upgrades, overrode those gains.

Graham said so far, the company has been financing the expansion entirely from cash flows, but is weighing financing offers on the table.

Paramount's recruitment drive, meantime, has snagged Gary Dixon, formerly of J. Wray and Nephew Limited. Dixon is now Paramount's chief revenue officer. Graham also said the lab was fully staffed and operational, but he continues to recruit for the plant.

"We're about halfway in terms of our requirements. In another month, we will have a better picture as soon as our prospective employees are in a position to come on board," Graham said.

Three years ago, the lubricants market was made up only of importers who distributed foreign brands, a group that included Paramount. However in 2016, LSC Jamaica - which has American and Jamaican ownership - commissioned a blending plant in Clarendon. LSC produces Top 1 oil in addition to contract manufacturing for unnamed clients.

LSC subsequently acquired the old Shell lubricant plant in Kingston under lease and is in the process of reactivating it at an undisclosed cost.

Additionally, a large-capacity plant was established in Old Harbour in March by West Indies Petroleum for US$8 million, but that facility is skewed to bunkering and lubricants for regional shipping and heavy industry.

Graham declined to disclose the capacity of the 13,500-square-foot Paramount/Allegheny facility and number of staff recruits, citing the competition. At the same time, he insists that Paramount will be the market leader when it launches into business.

"There is no one to compete with us, certainly not in terms of this lube plant, based on the conversations that we're having. And, already, contracts are being relocated to Jamaica from the United States - things are looking really good," Graham said.

The company expects business to pick up substantially once the plant comes online.

"While we don't want to be bound by numbers, I am prepared to say that 22 per cent year-on-year growth would a conservative outcome of our projections," the Paramount boss said.