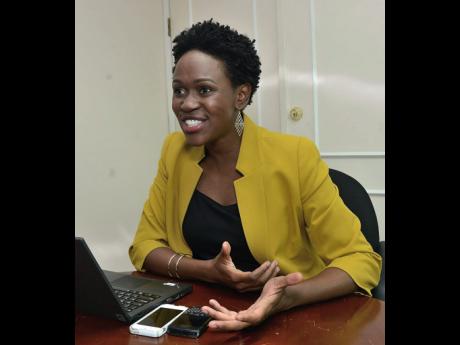 First Global Bank Limited, Jamaica's second-smallest commercial bank, is about to grow its network nearly fivefold but through a system of mini branches that will piggyback on existing infrastructure occupied by sister companies within the GraceKennedy family.

The bank also plans to grow the distribution of its services even further through the agent banking network, but those plans await central bank approval.

The first of the mini branches, which will be branded as 'First Global Money Link', opened Thursday at Paper Gold Limited, housed near the heart of Cross Roads at 15-17 Half-Way Tree Road, which GraceKennedy Money Services, GKMS, already operates. GKMS and First Global are subsidiaries of food and financial services conglomerate GraceKennedy Limited.

A second Money Link branch is already scheduled to open on August 9 at 26 Beadles Plaza in Santa Cruz, St Elizabeth, also at a GKMS location.

Money Link will allow customers to make with-drawals, deposits, loan and credit card payments, without having to enter any of the main banking outlets.

"We are going to be opening a wave of new locations across the country as part of our drive to become the number one bank in customer experience. Part of that is accessibility," McIntosh Robinson told the Financial Gleaner on Wednesday.

Eight mini branches are targeted for roll-out by the end of this year, and the other 20 by the end of 2018. Each will operate within around 100 square feet of space, but the bank says it prefers not to disclose the capex required for their set-up at this time.

McIntosh Robinson has run First Global Bank since February 2016. Since then, she has been executing a programme of accessible and convenient banking services. Under the mini branch set-up, the aim, she said, is to put Jamaicans no more than an hour away from a First Global Bank by leveraging the expansive network operated by GKMS and retail grocery chain Hi-Lo Food Stores.

Hi-Lo has 14 stores nationwide, while GKMS operates around 150 Western Union outlets. The idea is that persons doing their grocery shopping and money-transfer transactions will find it more convenient to also do their banking in the same locales.

"We have been thoughtful about what products we will offer to the public there, to ensure that they will take the time to stop," said McIntosh Robinson. "After collecting their remittances, they can open an account."

The Cross Roads mini branch is sectioned off, but located in the general area in which GKMS' money services are offered.

First Global's accounts are not publicly available, but central bank data on the commercial banking sector estimated its size at $57 billion in total assets up to March of this year. In the year that McIntosh Robinson has been in charge, the bank's assets have grown 23 per cent. Its loan book has increased in the same period by 14 per cent.

First Global did not comment on the size of its loan portfolio, but industry data from the Bank of Jamaica placed it at nearly $25 billion in March.

Relatively speaking, First Global is a tiny operator in a sector valued at $1.23 trillion by assets and $566 billion in loans. The No. 6 of seven banks accounts for around five per cent of the market in both loans and assets.

GraceKennedy reported to its shareholders earlier this year that First Global grew revenues in calendar 2016, on the back of a 13.5 per cent growth in the loan portfolio for that year.

"Profitability, however, declined over prior year, primarily due to costs associated with network expansion and investments in technology. Loan provisions were also higher than prior year, however, the bank continued to effectively manage delinquencies," said GK in its 2016 annual report.

McIntosh Robinson expects First Global to grow business even further as a result of the physical expansion under way. She describes the bank as being in 'transformation/growth mode'.

"We are doing this as a growth play. One, it helps us to improve the cost of funds, as we are able to grow the number of customers. The second thing is,7 it helps with revenue. We will still be processing loans," McIntosh Robinson said.

"As it relates to our network expansion, efficiency is also a big push. We believe that gone are the days of the traditional large branches, where customer stand in lines to do basic banking services. We are positioned well to take cutting-edge, innovative banking practices - very much in vogue globally - here in Jamaica and now expand into new branches at a much lower cost," she added.

As to the cost of the expansion, she said only that setting up a mini branch is about 10 to 20 per cent of the cost to roll out a larger branch.

"We are immediately shaving 80 per cent off the top line in terms of just the cost. So if it costs a dollar to roll out our Manor Park branch, it cost us 10-20 cents to roll out Cross Roads. That alone speaks volumes to the savings," the bank president said.

"What really helps us is a smaller footprint, but you can take a lot of the traffic. The technology base is very scalable. It is the backbone driving and facilitating these transactions, whether you are in a large or small branch."

She said there will be no ATMs in the mini branches to start, because the branch will offer the same function with quick turnaround time.

"If we see the volumes are so high that it is creating backlog and lines, we can make adjustments on the staffing side," said McIntosh Robinson. And the bank's video tellers will be rolled out at more branches by the end of 2018.

As it relates to agency banking - which will allow banks to contract retail businesses to distribute their services - Robinson said First Global intends to make use of agents to grow its business.

"We are still in the process of getting approval for offering agency banking services for additional locations. We need to get that approval ... but it is within our plans to open a number of agency banking locations before the end of this year," she said.

First Global expects to have at least one 'agent teller' from its own shop to work with each agent bank that provides its services, she added.

In June, the Bank of Jamaica said it was ready to implement agent banking services and that deposit-taking institutions could now apply to the central bank for permits.

Agent banking allows regular businesses to offer banking services on behalf of commercial banks, such as deposits and withdrawals; payments of bills and loan repayments; electronic transfer of funds; account balance enquiries; and collection of know-your-customer and customer due diligence documentation.

Each agent has to be approved by the central bank.