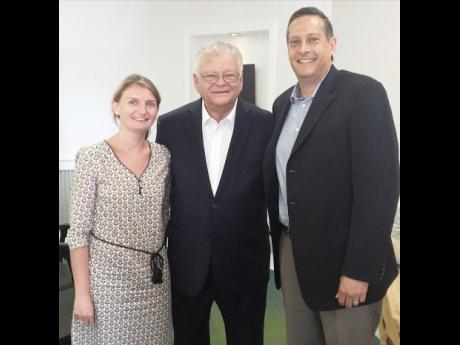 The Starbucks coffee shops to be opened in Jamaica will likely be supplied with roasted beans by Starbucks International from its own roastery overseas, an arrangement that will effectively see a Jamaica-based operation having to import Jamaican coffee.

The Coffee Industry Board, which regulates the local sector, says it is yet to receive import permit applications from local franchise holder Caribbean Coffee Traders Limited (CCTL), but the regulator anticipates the company will eventually seek a licence to bring in Jamaican and other beans.

"We have every intention of making Jamaican coffee central to the Starbucks experience in Jamaica. It will be a work in progress because of how they operate, because every single bean gets sent to the roasting facility and gets sent back to the destination," said Ian Dear, one of the partners in the Starbucks Jamaica franchise, while speaking at a forum in Kingston last week.

"So it is a process and it is very controlled. So the quality is consistent everywhere you go," he said.

Queries to Dear for further clarity on how the supply chain for Starbucks Jamaica will operate were unanswered up to press time.

Gusland McCook, the acting director general at the regulator the Coffee Board, told the Financial Gleaner on Wednesday that Starbucks roasts its beans from a centralised overseas location and then ships the roasted beans to its cafes in an effort to standardise quality and roast profile.

Starbucks International has purchased green beans from Jamaica for a number of years. It buys green beans from three main farms - Amber Estate, St Cloud and Wallenford Estate - which are exported then roasted and packaged for sale mainly in North America and Asia.

"We have not yet met with Starbucks," said McCook." We expect them to come to the table and meet with us at some time," he said.

Entities seeking to import coffee beans need a permit, which is approved by the agriculture minister on the recommendation of the Coffee Board. McCook said it is yet to receive an import application from the players.

Starbucks International representatives have been meeting with Agriculture Minister Karl Samuda, who has been touting the increased opportunities for coffee and dairy farmers that will result from the franchise's market debut.

Earlier this year, Samuda announced plans to impose a cess on coffee imports in an effort to incentivise local production of cheaper coffees, called 'lowland'.

Jamaica imports around 433 tonnes of green coffee beans each year to shore up its own supplies. The imports represent around $295 million (US$2.3 million) of expenditure annually that critics say can be better spent domestically to provide jobs and grow coffee output.