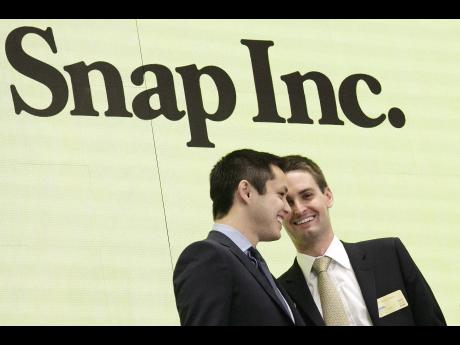 Facebook once failed to buy Snapchat; ever since, it's tried to copy it, mostly without success.

Until now. Facebook's Instagram Stories, a clear Snapchat clone, has more daily users than Snapchat itself - and parent company Snap Inc. should be very worried.

Snap's stock price has fallen 45 per cent since its initial public offering in May. While the doom doesn't spell imminent death, it's a sign that Snapchat could be relegated to the sidelines as a niche app for young people - or worse, a passing fad - rather than a major competitor for digital ad dollars like Facebook and yes, even Twitter.

An analyst for Morgan Stanley, the lead underwriter for Snap's IPO, recently cut his rating of the company's stock, citing competition from Instagram and worries that Snap's advertising offerings aren't evolving or improving. The analyst, Brian Nowak, said the company needs to do more so that advertisers don't see it as a mere experiment, but a serious player.

Instagram recently disclosed that Stories, which lets people share videos and snapshots in a continuous 24-hour loop, has amassed 250 million daily users in the year since it launched.

Snap was scheduled to disclose second-quarter financial results after the market closes on Thursday.

To grow or not to grow

"Facebook has proven themselves to be a fierce competitor," Gartner analyst Brian Blau said. Facebook, he added, understands how to get more and more people to sign up and keep using its services.

Snap CEO Evan Spiegel has long defended the company's decision not to make user growth its primary mission. He doesn't even like calling Snapchat a social network; he insists it's a camera company.

"There's a lot of this thing in our industry called growth hacking, where you send a lot of push notifications to users or you try to get them to do things that might be unnatural or something like that," Spiegel told investors in May.

Although that's an easy way to grow daily users quickly, Spiegel said, Snap doesn't believe "those sorts of techniques are very sustainable over the long-term."

Facebook sends notifications for all sorts of things, such as a friend doing a live video or another friend posting something after an extended absence. Another might be on a new item for sale in the service's "marketplace" section. These notifications - which primarily appear in the Facebook app but can also be pushed to the phone's home screen - can conceivably keep people returning day after day.

While Snapchat sends fewer notifications, it encourages daily use through Snapstreak, which calls out streaks in which two friends send each other snaps at least once for more than three consecutive days. But it isn't working too well, as daily use hasn't grown much.

Rivals don't always succeed. Facebook recently shut down Lifestage, which lets those 21 and under share photos, selfies and videos with classmates. Lifestage was aimed at high schoolers - a big chunk of Snapchat's audience.

Before that, Facebook killed Slingshot, another Snapchat clone for sending disappearing messages. In turn, that followed the demise of Poke, which also let people send photos and videos. All that followed Snapchat's decision to rebuff Facebook's US$3 billion offer for the service in 2013.

But Facebook and others kept trying and trying, until Facebook succeeded with Instagram Stories. Easy to use and piggybacking on Instagram's existing popularity, Stories expanded Snapchat's idea to a broader range of users. While Snapchat's audience is mostly teens and young people, on Instagram, anyone might send a "story."

It signals that even as Snapchat plays down user growth, having a strong and broad user base can be crucial to success.

Other messaging apps are looking to clone Snapchat, too. Google is reportedly working on Stamp, which The Wall Street Journal compared to Snapchat's Discover feature for letting people find photo and video-heavy news items. While Google isn't commenting on Stamp, published reports say the company is in talks with the likes of Vox Media and Time Inc. to create such content.

But Blau said growth doesn't necessarily have to be Snap's primary focus if the company is able to make money from the users it does attract.

On this front, the company has made some strides, eMarketer analyst Debra Aho Williamson said. For example, it has launched new tools for businesses to create and distribute ads on the app.

These, she wrote in an email, "will help bring in new ad dollars, particularly from small and midsize marketers."

But, Williamson said Snap must do even more - so advertising on it is no longer just an experiment.