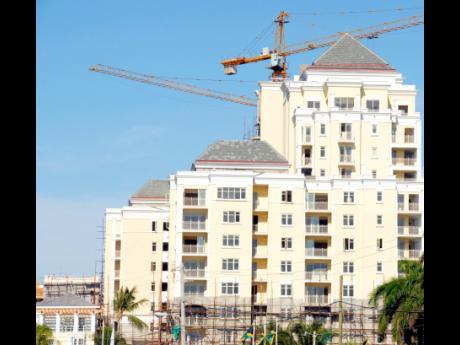 This file photo shows the Palmyra condominium resort in the early phase of the development at Rose Hall, Monteg Bay. The resort has since been sold to managed funds overseen by Sagicor Group Jamaica in 2016.

​Damages from a lawsuit won by the Palmyra condominium resort development just before it was put in receivership are to be paid over to a company called Jade Overseas Holdings, Jamaica's Supreme Court has ruled.

Jade was the entity used by the condo developer to pay legal fees on fraud cases it pursued in Jamaica and overseas.

Palmyra and Jade are connected through Robert Trotta, the initial conceptualiser of the condo resort project.

The July 20 ruling by Justice Brian Sykes gives Jade the rights to collect US$2.27 million awarded in an uncontested lawsuit more than six years ago, funds that Palmyra receiver Ken Tomlinson of Business Recovery Services Limited had argued unsuccessfully should go to the receivership.

He has since filed an appeal.

The July 20 award is around half of what Jade was seeking to collect in various jurisdictions. The company wanted to recover more than US$5 million for funding litigation in Jamaica, Canada and China, according to the judgment written by Justice Sykes.

To recover the money, Jade filed suit against Palmyra Properties Limited, Sanctuary Systems Limited, both of which are in receivership, as well as receiver Kenneth Tomlinson.

The funds were from a lawsuit dating back to 2009 when Palmyra and Sanctuary took, among others, one of their directors Dennis Constanzo to court for fraud and breach of contract. They were awarded summary judgment of US$2.27 million in Jamaica against Constanzo in January 2011.

That was around six months prior to Palmyra's takeover by its bankers, National Commercial Bank and RBC Royal Bank, which placed the development in receivership in July 2011 on claims of unpaid debt relating to loans valuing a combined US$110 million. Trotta has contested the debt and is still fighting the takeover in court.

Jade contended that Palmyra and Sanctuary were cash-strapped and could not fund from their own resources the global litigation that would be necessary to be pursued against Constanzo and others in several jurisdictions.

This led to a management agreement dated May 25, 2009 between the parties in which Jade would act on behalf of Palmyra and Sanctuary in securing and paying for legal and other services.

In exchange, Jade would be paid back out of any sums recovered by Palmyra and Sanctuary from cases won either based on awards by courts, arbitrators or private settlements. The money Jade claimed was assigned to it under the management agreement.

The company said it was guaranteed recovery of its costs and fees if there were no recoveries or awards from the lawsuits during a 10-year period. It was restricted to recovering just the costs of funding the litigation and was to provide an accurate accounting of funds advanced.

Tomlinson contended that assignment of the proceeds of the January 2011 judgment was in breach of the debenture between Palmyra, National Commercial Bank and RBC Royal Bank.

But Justice Sykes rejected that argument, saying the persons or entities in possession of the funds were effectively holding the money in constructive trust for Jade.

Attorney Kwame Gordon, who represented the receiver, said they have filed an appeal against Sykes' judgment.