David Jessop | Rail and its future in the Caribbean 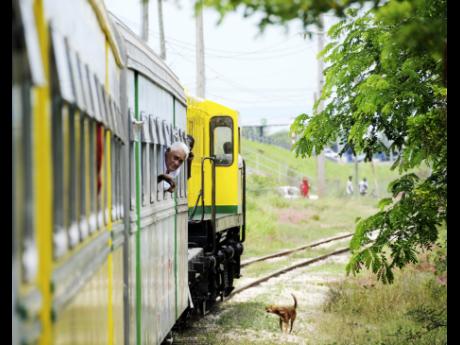 Gladstone Taylor
In this April 2011 file photo, Transport Minister Mike Henry peeks out of a window of a Jamaica Railway Corporation train during a test run of the rail service from May Pen to Linstead. Plans to restore Jamaica’s rail service continue, and the government is working with American rail company Herzog to get the trains rolling across the country.

Historically, Caribbean railways existed to carry cane to factories or raw sugar and molasses to ports.

Later, they were used to transport other agricultural crops and minerals, and as urban populations grew, provided passenger services.

However, the demise of sugar, high operating and maintenance costs, and improvements in road transport have seen railways all but disappear in most of the region.

Nevertheless, there is again interest in the newer role a modern railway system might play in the Caribbean, with both Jamaica and Cuba, in very different ways, seeing relevance in the renewal of part or all of their existing networks.

In Jamaica's case, the approach is relatively limited.

In February, in the throne speech, Governor-General Sir Patrick Allen said that improved transportation was critical to meet the demands of the country's growing population, particularly in urban areas. He then went on to announce that government hoped to rehabilitate the country's railway network on a phased basis in partnership with the American railroad contractor Herzog International.

The announcement followed the signing in December 2016 by the Jamaican Government of a non-binding memorandum that will see US$250 million invested in the resuscitation of the country's freight and passenger rail service. This is expected to involve construction in three stages: Montego Bay to Appleton, Spanish Town to Ewarton, and Spanish Town to Clarendon.

As with all such railway projects, financing is challenging, but it appears likely that the first phase from Montego Bay to Appleton will move forward because it can be related to tourism.

Speaking about this recently, Chief Executive Officer of Sandals Resorts International Adam Stewart told The Gleaner that Chukka Caribbean Adventures, a joint venture, had put a proposal to the Jamaica Railway Corporation, which owns the country's rail network. This, he said, could see the JRC monetise and obtain significant cash flows from the Montego Bay to Appleton portion of the line by enabling its use by visitors from cruise ships, hotels, and tour companies. It would, he suggested, also bring economic benefit to rural areas that tourists do not visit at present.

Elsewhere in the region, a similar approach has helped resuscitate another rail system that was on the verge of extinction. Following the demise of St Kitts cane sugar industry in 2005, the island's narrow-gauge cane railway was taken over by the St Kitts Scenic Railway, which now carries visitors on 18 miles of track that pass though cane fields, rainforest, and alongside the ocean.

There are also two rapid-transit metro systems in the region. The Tren Urbano in San Juan, Puerto Rico, and the Metro Santo Domingo in the Dominican Republic, which with its two lines and 30 stations now accommodates around 74 million journeys annually.

At present, the Cuban railway system consists of an east-west spine route between Havana and Santiago de Cuba with numerous branch lines and services, many of which are in a poor state of repair. However, later this year, a €1.8 billion (US$2.1 billion) Russian-supported project is expected to be signed off that will create an efficient, higher-speed rail system that will become a central element in the country's national transport infrastructure.

According to Cuban television, the country is to upgrade almost all of its railway system in segments. This will involve all tracks being resignalled and rebuilt to accommodate faster running times and the addition of a higher speed line linking Havana to Varadero, one of the country's main tourism resorts.

Speaking on the sidelines of the St Petersburg International Economic Forum a few weeks ago, Russia's First Vice-President, Alexander Misharin, confirmed to journalists that final contracts are expected to be signed by the year's end, after which work will begin.

The initial objective, according to the Russian News Agency TASS, is to completely overhaul over 1,100km of track by 2030 in a project that will involve Russian finance and will be managed by the Russian state-owned railway company RZD International. Russian Railways, which owns RZD, is considering operating the Cuban system.

Separately, a new line from Havana to the country's international port and special development zone at Mariel was opened in 2014, along with other new lines aimed at improving capacity and journey times to Mariel and its adjoining rail container terminal. In addition, work is under way on acquiring new locomotives and rolling stock and rebuilding major stations, including in Havana, Santa Clara, and Camaguey.

Beyond this, however, the future prospect for Caribbean railways remains uncertain.

The downside is that the capital investment they require and the long periods needed to achieve a commercial return place railways beyond the ability of governments to finance, requiring instead an economic model that is difficult to structure if it is to satisfy both the interests of operators and governments.

On the plus side, railways are environmentally friendly, can open areas away from the coast to tourism in ways that spread wealth and create growth, and can facilitate development and economic integration by linking cities.

For most Caribbean nations, building or resuscitating long-gone railways is not a viable economic proposition, particularly as in most cases, tracks have been torn up and the land sold or built over.

David C. Robinson's Railways of the Caribbean provides fascinating details on this and the rise and fall of railways that once operated in almost every country in the region.

However, some industry experts suggest that niche opportunities exist in some parts of the Caribbean. These involve new build light railways for tourism and the development of rail-based freight systems that can open and link the interior of countries with substantial hinterlands to cities and the sea.

As the 2015 paper Caribbean Rail Transport: Not Lost and Not Forgotten, published by the Association of Caribbean States, suggests, there is a potentially significant future role for railways in larger countries to link rural areas to gateway ports to supply agricultural and manufactured items to the region and internationally.