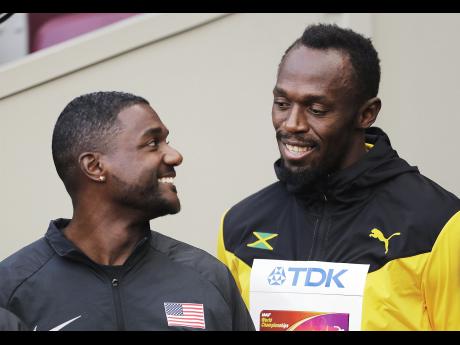 It was not to be. On Saturday evening local time, Usain Bolt was handed his lone World Championships bronze by Justin Gatlin, from the United States.

Bolt's swansong was supposed to have left those at the stadium in London, at Half-way Tree, and the millions of adoring fans around the world jubilant. But it was not be. There was a stunned stadium whose gasp of disappointment was palpable. And the reason was obvious.

Justin Gatlin had returned to the sport after serving a four-year ban which ended in 2006. Many feel that it would be more palatable if Bolt were at least beaten by any other athlete. The taste of Gatlin's cheating still leaves a bitter taste in some spectators' mouths.

Bolt doesn't agree, and I tend to hold his view. Bolt feels Gatlin has served his time according to the rules of the sport, has come back, and is competing within the spirit of the game. His defence of Justin Gatlin is unequivocal.

"Over the years I've always said he has done his time. If he's here that means it's okay. I've always respected him as a competitor over the years. He has worked hard, and I've always said that he's one of the best competitors I've ever competed with. He was the better man tonight, he executed well, and so for me I look on him as any other athlete, just another competitor, who deserved to be here," Bolt said.

In those words spoken in his post-race interview, Usain Bolt revealed that he had heart of a champion. He also showed his class, graciousness, humility, decency and his understanding of redemption. This, of course, does not mean that he is lacking in pride or is diffident, but he's able to call it like it is.

Apart from the men's 4x100m, Bolt's athletic career is over. His excellent career is one which we in Jamaica can look to emulate, even if we are not in athletics. That he has finished his career with no scar on his reputation, in over a decade, is something we all can be proud about. He competed without using drugs, in an age in which athletes have tried to cheat the system.

Now, no matter what Justin Gatlin does, there will always remain a lingering question in people's minds. However, no such doubts will linger as an aftertaste to mar the bittersweet taste of knowing the legend, Usain Bolt, is now a memory. The splendour of such a brilliant career makes one forgets the only bronze medal got by such a legend in the collection.