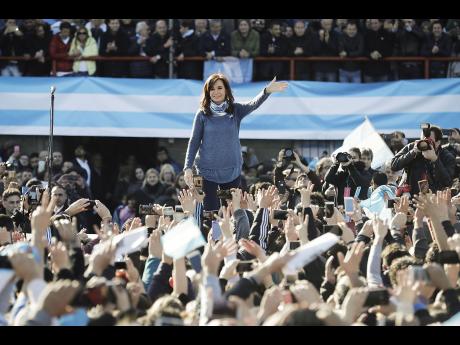 AP
In this June 20 file photo, Argentina's former President Cristina Fernandez de Kirchner waves to supporters during a rally to launch her new political front Unidad Ciudadana or Citizens Unity Party, on the outskirts of Buenos Aires, Argentina. Contrary to pollsters predictions, Fernandez, who is running for a Senate seat, was not able to surpass her opponent, but tied with the ruling party candidate in the Sunday, August 13 primary. 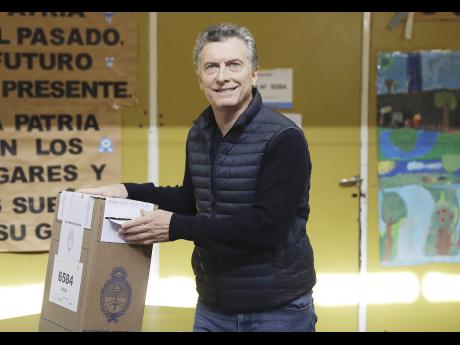 The surprising success of President Mauricio Macri's political coalition in key Argentine provinces in a primary election has strengthened its position heading into October's midterm legislative vote and given a boost to its pro-business economic reforms.

Sunday's primary vote to determine the candidates in Argentina's legislative elections was closely watched to gauge the popularity of Macri and the strength of former President Cristina Fernandez de Kirchner, who is expected to run for a Senate seat in October.

Argentina's stocks and currency markets were bolstered Monday by the positive performance of Macri's Let's Change coalition, especially in Buenos Aires province, where more than a third of Argentina's electorate lives.

Investors fear a return of the populist Fernandez, who has vowed to fight the reforms of Macri, her conservative successor.

Fernandez had been widely expected to beat Macri's candidate in Buenos Aires province, but with nearly all the polling stations counted, Esteban Bullrich had 34.19 per cent of votes compared to Fernandez's 34.11 per cent.

The virtual tie was seen a major win for Macri.

"It was a good election for the government with some triumphs that were expected and other important surprises," said Patricio Giusto, head of the Diagnostico Politico consulting firm. "In Buenos Aires, the polarisation prevailed, which is favourable for the government."

Fernandez, who governed Argentina in 2007-2015, claims to have won Sunday's primary election. The final results are expected to be published in 10 days.

"They will try to hide, make up and confuse, but they won't be able to do it," Fernandez said Monday. "Argentina's democracy is stronger than their manipulation and arrogance."

Giusto said that although Fernandez had her worst election in Buenos Aires province, where she always won before as a candidate for the Senate and the presidency, she remains popular and could still come in first in October's midterm elections. Those votes will choose a third of the Senate and half of the lower house of Congress.

During her presidency, Fernandez kept prices low for things like bread, bus rides and energy prices, and her government distributed handouts for the poor. But her free-spending policies led to soaring consumer prices, limits on exports and currency controls that created a black market for dollars.

Since leaving office, Fernandez has been hit by a string of corruption scandals and was indicted last year. But she returned to Argentina's political stage earlier this year by launching a new party called Citizens Unity.

Macri was elected promising to clean up corruption and jump-start the economy with a pro-business government that would roll back some of Fernandez's policies and cut back government spending. But he has struggled to rein in double-digit inflation and has been criticised for firing tens of thousands of state workers and slashing utility subsidies.

"These 19 months have been very tough," Macri said after polls closed. "I thank you because despite the difficulties, you believe that we're on the right path."