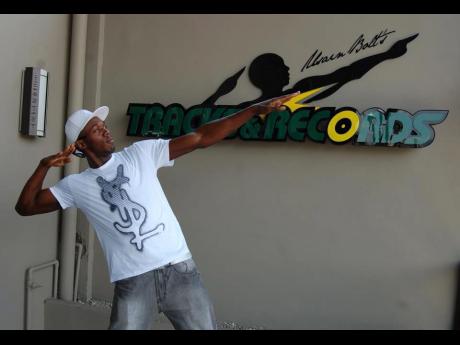 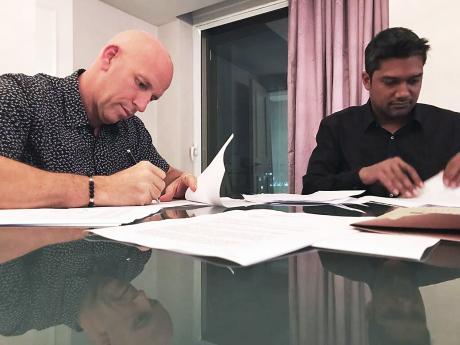 In this photo released in the week ending August 11, 2017, Managing Director of FranJam, Gary Matalon (left) and CDRG chief executive officer Aly Esmail sign a franchise agreement to open 15 Usain Bolt Tracks & Records restaurants in the United Kingdom over the next five years.
1
2

Gary Matalon, CEO of KLE Group Limited, is projecting a rise in revenue for the listed company from both the initial franchise fee and royalties arising from the new deal between associate company FranJam and United Kingdom-based Casual Dining Restaurants Group (CDRG).

Matalon is managing director of FranJam, the vehicle through which the company's franchising operations are executed, co-owned with majority shareholder Joe Bogdanovich.

The UBTR franchise is a nascent side of the operation, under which the first restaurant was opened by Marsha and Joshua Jhamani in Ocho Rios in 2016, and the second by hotelier Christopher Issa on the Gloucester Avenue 'Hip Strip' in Montego Bay this summer.

KLE had been known to be exploring multiple foreign markets for the UBTR franchise, of which the deal with CDRG is the only solid partnership announced to date.

"The multi-unit development agreement specifies 15 units over the next five years, at a rate of three per year," Matalon told Gleaner Business. "The franchisee is currently seeking the ideal sites."

"The deal is structured as a franchise very similar to the franchises that we have in Ocho Rios and Montego Bay. The difference with this one is that it is a multi-unit deal. There is an initial franchise fee, followed by a royalty on all revenues," Matalon said.

CDRG is a private company and sister operation to the SME Group that operates 120 restaurants and hotels, under franchise.

"We are pleased to add this incredible Jamaican brand to our growing number of franchises across the world. This partnership with Usain Bolt and the Tracks & Records brand will allow us to introduce an experience to our markets here in the UK that is as close as it gets to actually visiting the island and will give them a real taste of Jamaica," said CEO Aly Esmail in a joint statement with KLE Group.

Matalon said KLE is set to reap the results of the business model, which has been six years in development.

"FranJam's investment has been made in the development, marketing and selling of the brand. Beyond that, we provide CDRG all the support to get them up and running and ensure they are as competitive as possible delivering the highest standards in an efficient and profitable restaurant system," the FranJam boss told Gleaner Business.

"KLE is benefiting from this deal already from the management contract with FranJam. In addition to this, KLE will share the profit generated from the UK operation. The first unit is scheduled to be opened within six months. Profits increase significantly as each unit opens," he said.

A new company will be created to run the UK operation, but Matalon did not give further details.

FranJam is owned 51 per cent by Bogdanovich. KLE gave up majority ownership of its franchising arm to the Downsound Records CEO in exchange for fresh capital to reinvigorate KLE.

Usain Bolt remains among the top ten shareholders of KLE and earns income from dividends and royalties, Matalon said. "He does well out of it, and as we continue to grow that will increase exponentially," he added, while noting that arrangements with Bolt remain the same as in 2010 when the deal between the KLE and the athlete was inked.

Since the disposal of its loss-making nightclub operations and sale of FranJam holdings, KLE has returned to black. For the second quarter ending June, it made net profit of $5 million compared to $44,815 for the similar period in 2016. Revenue climbed to $54.3 million in the quarter compared to $46.1 million the year before.

Matalon said he did not expect Bolt's performance in the last World Championships in London to affect the brand.

"I don't believe the 2017 World Championships will have any impact on our brand at all. Keep in mind our partnership with Usain was formed in 2010. At that time he had the world records but was far from achieving clean sweeps in two subsequent Olympics. In the middle of all that we had a false start in 2011," he recounted.

"As much as it seemed the world was coming to end, this didn't impact the brand at all. It all forms part of the story. We are on the edge of our seat for the next chapter and the Tracks & Records brand continues to develop as a world-class global brand," Matalon said.