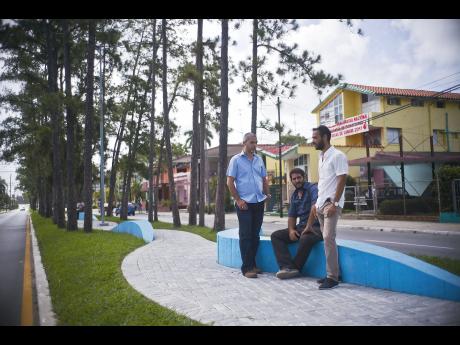 AP
In this July 26, 2017 photo, Cuban architects Yasser Jimenez, left, Oriesky Bencomo, center, and Jose Luis Valdes, right, pose at the site one of their urban designs in Pinar del Rio, Cuba. The central avenue of the western city of Pinar del Rio, population 150,000, was redesigned over the last three years by the architects contracted by the communist provincial government, a contract that would have been unimaginable in Cuba just a few years ago. (AP Photo/Ramon Espinosa)

But the project is part of a fragile experiment whose success or failure might help determine if Cuba is able to pull itself out of years of economic stagnation and brain drain.

The central avenue in the western city of Pinar del Rio, population 150,000, was redesigned over the last three years by a private firm of three 20- and 30-something architects hired by the communist provincial government - a contract that would have been unimaginable in Cuba just a few years ago.

Over the last decade, Cubans making state salaries of less than US$25 a month have moved by the hundreds of thousands into the private sector - opening stores, restaurants and bed-and-breakfasts that have been among the few sources of growth for the island's moribund centrally planned economy.

Graduates of Cuba's renowned free universities have been mostly left out of private jobs in their fields, because the state sees the privatisation of professions like architecture and accounting as unacceptable in Cuba's socialist system.

The government has argued that individuals shouldn't profit, feeding inequality, from society's costly investment in free education. Professionals looking for better lives have emigrated by the tens of thousands or turned to unskilled but higher-paying work, like waiting tables or driving taxis.

The experience of Agora, the three-year-old boutique design firm in Pinar del Rio, offers a glimpse at an alternative future.

The three architects began Agora, a Greek word meaning 'public space', thinking they would work largely for private citizens renovating their homes as bed-and-breakfasts in Pinar and the town of Vinales, a major tourist attraction 30 miles away.

In 2014, however, the firm learnt that the provincial government was asking state-run engineering firms to bid on renovating the median strip of Calle Marti.

Agora bid for the design of the project and won, convincing officials it could do the work quickly and more efficiently. State workers are now finishing the project, and today thousands of Pinarenos a week stroll and sit in the shade along the newly rebuilt avenue.

"We really appreciate the open minds of those in the government who realised they needed help from people," said Yasser Jimenez, 36, who founded the firm with Oriesky Bencomo, 37, and JosÈ Luis Valdes, 27.

All three were born and raised in Pinar but graduated from the prestigious architecture programme at JosÈ Antonio Echeverria University in Havana. All three took state jobs in architecture and design before founding Agora in 2014.

Agora isn't officially an architecture firm the government doesn't yet permit that. Jimenez, Bencomo and Valdes are individually registered as self-employed decorators and artisans.

That leaves them and others like them legally unprotected and vulnerable to the whims of bureaucrats. A highly successful 200-member cooperative that provided accounting and auditing services to state and private businesses was closed by the government this month, because it had violated "its social purpose", according to state officials who provided no further explication.

Private business people in all sectors are equally exposed. The government this month froze all new private business licences until further notice, saying in vaguely worded statements that it would be "reordering" and "perfecting" the permit system.

Young professionals such as Agora's founders are watching carefully to see if Cuba becomes a place where people like them can flourish.

"We're young people who've decided to stay, to live here, and really, we'd like to do more," said Jimenez. "All types of projects, provide engineering services, build a building from zero."

Government figures showed that the number of Cubans working in 200 permitted categories of private employment rose from 140,000 in 2009 to 535,000 in 2016. Some 400 worker-owned and run cooperatives are currently operating in non-agricultural fields like construction or recycling.

Cuba opened to private business because the state firms that control most of the economy are widely acknowledged to be inefficient and slow and plagued by poor workmanship and pilferage. But the success of the private sector has come to be seen as a threat by government officials who are both competing with it and have the power to regulate it.

Pavel Vidal, a Cuban economist who emigrated to work as a professor at Javeriana University in Cali, Colombia, said he believes private-sector employment grew seven per cent in 2016 even as the national economy shrank 0.9 per cent, throwing the country into recession.