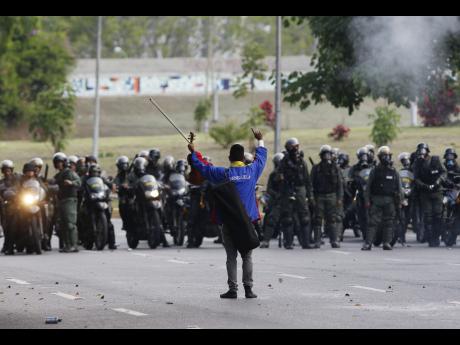 AP
This May 18, 2017 photo shows an anti-government protester confronting National Guard in Caracas, Venezuela. The Venezuelan economy is in turmoil, and international investors are weighing the prospects of the country defaulting on its debt.

As Venezuela's political, economic and social situations unravel, some people are asking what happens if the government defaults.

While the South American country keeps on pulling rabbits out of its hat, its luck may eventually run out. In case it does default, there is no doubt that chaos will reign as exports collapse.

Venezuela imports all of its food and medical supplies, as well as the light crude that it needs to dilute its viscous heavy crude. Otherwise, it cannot pump the oil into pipelines and on to ships.

Without access to hard currency, Venezuela's trade will grind to a halt. Imports will cease, as well as exports. Food shortages will develop into famine, and food riots will become mayhem. Most likely there will be regime change, and the new government will re-establish ties with the multilateral lending agencies.

However, as has been the case in previous scenarios, one of the multilaterals' strict conditions will be a deep restructuring of the debt. Washington sees this as an opportunity to give the new government a fresh start by cleaning up its balance sheet. At the same time, it is a way to assure that no multilateral funds are used for bailing out bondholders. Given these conditions, let's take a stab at estimating a recovery value.

Venezuela's foreign debt is roughly US$97 billion. The sovereign government has about US$38 billion in outstanding bonds. PDVSA has US$28 billion.

Although the numbers are not precise, Venezuela has paid down significantly its Chinese debt. It owed it US$50 billion, but it now owes only US$20 billion. Meanwhile, PDVSA owes another US$11 billion to Russia.

In other words, Venezuela's London Club debt is about US$66 billion, and its Paris Club debt is estimated at US$31 billion.

It has been years since the government published national income account statistics. However, we believe that the devastating effects of hyperinflation, the plunge in oil prices and the deep recession has pushed the country's GDP to slightly below US$100 billion. This means that the country's total debt load is high, but not completely untenable.

Still, the multilaterals may demand that the government reduce its debt load to 30 per cent of GDP. Hence, the restructuring would probably entail a haircut of 70 per cent.

However, there are a lot of problems with this simple exercise. First, it assumes that the Paris Club creditors, Russia and China as bilateral lenders, will accept such conditions. The Russians protested vehemently when Ukraine attempted to impose a haircut on their bilateral obligations. Likewise, the Chinese are willing to reschedule debt service payments. However, they have not accepted any form of haircut on their bilateral loans.

The second problem is that the assumptions about Venezuela's GDP are wrong. Since 2000, Venezuela's average GDP has been around US$215 billion. It reached a high of US$390 billion in 2013, when the currency was grossly overvalued. However, the collapse of the currency severely understates the size of the economy.

With a population of 34 million and average per capita income of US$6,000, a GDP of US$200 billion is a much more realistic level. The economy will also normalise, once confidence returns and oil prices recover. Assuming a GDP level of US$200 billion and a debt-to-GDP ratio of 30 per cent, the haircut should be reduced to about 35 per cent. Assuming that there is a discount for deal risk and unaccrued interest, the bonds should fall no lower than the high 30s in the event of a default.

Of course, there remain the issues of the Paris Club debt and the starting assumptions for the post-default GDP levels.

This simple recovery-value exercise does not disaggregate the PDVSA and Venezuelan bonds. Sovereign debt restructuring lawyers and leading legal scholars, namely Lee Bucheit and Duke University Professor Mitu Gulati, argue that both sets of debentures have collective action clauses or fiduciary agents that should lead to similar outcomes.

There is also the issue of whether the PDVSA bonds will be treated as corporate debt and subject to New York bankruptcy law. Last of all, there is the issue of the CITGO collateral, and the geopolitical aspects of a Russian state company controlling an important United States oil refinery.

All of these complexities will probably delay the restructuring process, but recovery values should remain high.