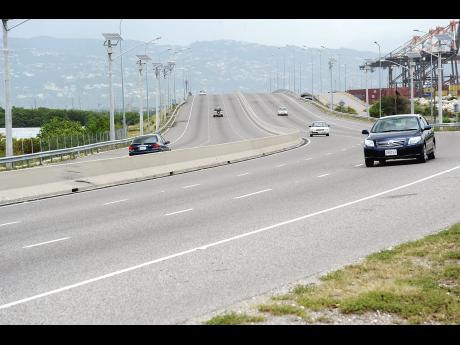 Norman Grindley
In this 2013 file photo, vehicles traverse the toll highway. Motorists should be alert to potential collisions, some of which might be staged for insurance purposes.

QUESTION: I am writing to you with frustration and tears in my eyes. My car was involved in an accident in May 2013. I was travelling from Kingston to Old Harbour on the toll road. I was in the right lane going below the speed limit at about 100 kph. It was about 10 o'clock at night and there were few cars on the road. I saw two cars ahead in the left lane. I continued in the right lane as there were no other cars in front of me. Upon reaching very close to be in line with one car in the left lane, the driver suddenly cut over in front of me without giving a signal. I immediately applied my brakes and swerved a little to the left in order to avoid a direct hit. However, my car hit the Tiida in the left rear. The right front of my car was badly damaged. After the impact, my car ricocheted into the BMW car that was travelling in the left lane and slid back into the right lane and stopped. When I spoke with the driver of the Tiida, he said he didn't realise I was so close. The BMW driver said the Tiida driver was impatient and caused the accident. Four years later the matter remains unresolved. Can you please help?

INSURANCE HELPLINE: Sadly, there is nothing that I can do to help resolve your problems four years after the accident. This was my initial conclusion after the first read of your very long email. Your insurer's claims manager's response to my enquiry about the matter supports that decision.

Call it intuition, sixth sense or whatever, I believe that you were the innocent party to a staged collision. The drivers of the two cars that were hit by your vehicle were main actors in the plot. Their motive? To collect money for inflated property damage and personal injury claims from your insurer.

However, I am using your unfortunate experience to enter this newspaper's conversation about the important topic of corruption. Why? Recent reports about alleged misdeeds at the Firearm Licensing Authority, the review of the Tivoli Report on behalf of the Jamaica Constabulary Force, and the conviction of a "popular medical doctor" for corruption come to mind.

There is a causal link between corruption and insurance fraud. In an article published on June 19, 2014, 'Insurance fraud is a billion-dollar industry', I quoted Transparency International as saying "the most problematic factors for doing business (locally) was inefficient government bureaucracy, crime and theft and corruption".

I also posed the following question: Is this one of the reasons organisations like the Jamaica Bankers Association, the Embassy of the United States of America, the Financial Investigations Division of the Ministry of Finance, The Broadcasting Commission, Jamaica Public Service Company, Digicel and LIME (as partners) have separately launched initiatives to fight the scourge?

What happened to you, I believe, is a real-life example of sophisticated attempts at insurance fraud. It is likely to end with you directly and other insurance consumers indirectly, paying for it. Insurance company sources say that some professionals like lawyers and doctors are also involved in the racket. Based on recent reports about the alleged illicit activities of members of these two groups, these accusations do not appear to be far-fetched.

The US Coalition Against Insurance Fraud says that "many dishonest drivers will manoeuvre innocent motorists into auto crashes. Their cars may only suffer small dents, but the crooks still make large and illegal claims for fake injuries and car damage against your auto insurance company, or their own."

The coalition would describe your accident as a variation of the swoop and squat: "A suspect vehicle suddenly swoops in front of you (or suddenly switches lane) and jams on the brakes, causing a rear-end collision. Often the suspect car has passengers who pretend to have painful back or neck injuries and make large claims for personal injuries and property damage."

Since the third parties' vehicles are insured with the same insurer and both drivers are saying that you caused the collision - contradicting the oral statement each driver made to you at the scene - it is highly unlikely that their insurer will accept your version of how the accident occurred, unless you can produce evidence that shows that they are both lying.

If both drivers are not telling the truth about how the accident actually occurred, is it wise to assume that they will be honest in calculating the losses that they say they incurred as a result of the accident they played a role in staging?

Gleaner contributor Rosalea Hamilton is absolutely right. Non-corrupt behaviour is a moral obligation. Fighting corruption is a civic responsibility. Too many of us, to quote her, "perpetuate a culture of corruption through (our) own practices and inaction".

Dishonest practices on the part of policyholders complicate insurer-policyholder dealings. Problems usually surface when claims are submitted.Deadlocks, long delays and/or lawsuits are the norm with these claims. Much in the same way that some retailers treat all their customers as thieves by default by examining receipts, some insurers treat all their customers as potential fraudsters by default until they have evidence to prove otherwise.

NHT INSURANCE: Last Wednesday, NHT's communication department responded to my column of August 20. They wrote that the Trust's website displays a summary of the peril insurance coverage for the period April 2017-April 2018 and also that access to the full policy document is available "upon making a direct request to the NHT".