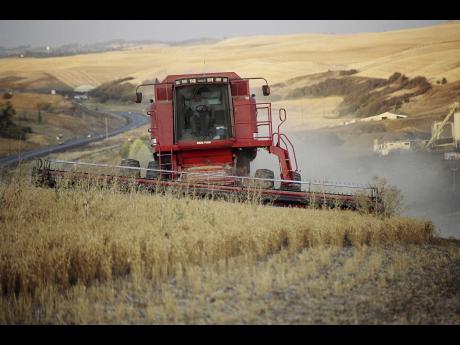 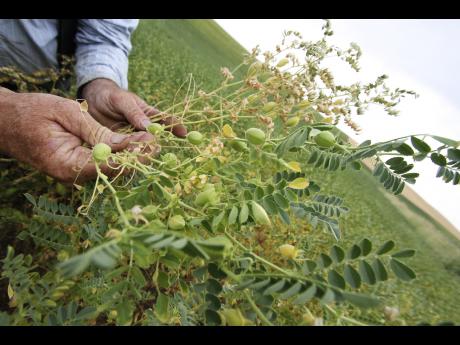 In this 2015 photo provided by the USA Dry Pea & Lentil Council, farmer Howard Jones, chairman of the Idaho Pea and Lentil Commission, inspects his chickpea field near Genesee, Idaho.
1
2

An odd thing has happened in wheat country in the United States a lot of farmers aren't planting wheat.

Thanks to a global grain glut that has caused prices and profits to plunge, this year farmers planted the fewest acres of wheat since the US Department of Agriculture, the USDA, began keeping records nearly a century ago.

Instead of planting the crop that gave the wheat belt its identity, many farmers are opting this year for crops that might be less iconic but are suddenly in demand, such as chickpeas and lentils, used in hummus and healthy snacks.

"People have gone crazy with chickpeas. It's unbelievable how many acres there are," said Kirk Hansen, who farms 350 acres (142 hectares) south of Spokane in eastern Washington, where wheat's reign as the king crop has been challenged.

American farmers still plant wheat over a vast landscape that stretches from the southern Plains of Oklahoma and Texas north through Kansas, Nebraska and the Dakotas as well as dry regions of Washington and Oregon. However, this year's crop of 45.7 million acres (18.49 million hectares) is the smallest since 1919.

North Dakota harvested wheat acres are down 15 per cent, Montana 11 per cent and Nebraska 23 per cent, to the state's lowest winter wheat acres on record.

Many farmers took notice of a surging demand for crops driven by consumer purchases of healthy high-protein food.

"The world wants more protein and wheat is not the high-protein choice and so that's where your use of those other things come into play and are doing better," Hultman said. "Up north around North Dakota you will see more alternative things like sunflowers, lentils and chickpeas."

How long the new trend will continue is unknown. While some farmers will likely switch back to wheat when profitability returns, others may keep planting the alternatives because demand is expected to remain strong, keeping prices at attractive levels.

A farmer in southwest North Dakota, for example, could expect to earn US$105 an acre on small chickpeas and around US$89 an acre planting lentils this year, according to data compiled by North Dakota State University. The same farmer would lose US$21 an acre on winter wheat and US$4 an acre on spring wheat.

Lentils are increasingly used in cereals, energy bars, chips and pasta as a way to boost protein and fibre content. General Mills now offers Cheerios Protein, which includes lentils, and Barilla Protein Plus pasta contains flour from lentils and chickpeas as an ingredient.

About 20 per cent of US consumers now say they eat at least one meatless meal daily and get their protein instead from plant-based sources, said Kelly Weikel, director of consumer insights at Technomic, a Chicago-based market research firm that tracks food trends.

"We've been able to maintain a strong demand for these crops, which is why farmers in the northern Plains and Washington and Idaho are continuing to grow them and increase their acreage," said Tim McGreevy, an eastern Washington farmer.

High-protein snacks that were once found primarily in health food stores are now available in typical grocery stores.

Hummus is a good example. Made from chickpeas, the dip and sandwich spread was considered an exotic Middle Eastern food just a few years ago but is now found in more than a quarter of US households. Hummus sales have grown to US$700 million to US$800 million in recent years from US$10 million in the late 1990s.

USDA reports show other crops have been pushed to record planting this year by changing consumer tastes, including canola and hops.

Canola, used for frying and baking and as an ingredient in salad dressings and margarine, was planted on 2.16 million acres (0.87 million hectares) this year, 22 per cent higher than the previous record set in 2015, the USDA said.