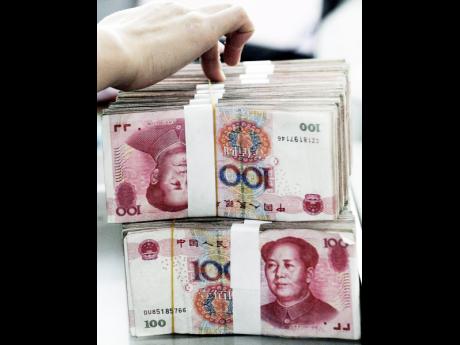 A stack of Chinese yuan.

The international profile of the Chinese currency, the renminbi or RMB, is on the rise and the Caribbean Development Bank, CDB, says regional institutions should consider using it to get around their correspondent banking challenges with banks in North America and the United Kingdom

"Although the RMB is not fully convertible as yet, there is room for consideration for inclusion in the basket of reserve currencies," he said.

"The potential for the use of RMB in the Caribbean depends on whether RMB can provide similar benefits to the regional economies, which is provided by the use of US dollars," he said.

The rise of the renminbi manifested in 2016 when the International Monetary Fund (IMF) added the Chinese yuan to its basket of currencies for the calculation of special drawing rights, or SDRs, putting it in the class of the pound sterling, US dollar, Japanese yen and the euro.

Ram noted that "some of the main requirements" that the private and public sectors traditionally look for in a reserve currency are IMF reserve status of the currency, its use by major central banks, the existence of deep and liquid bond markets in the issuing country, geopolitical strength and political stability, and the strength of the current account of the country issuing the currency.

Although not fully convertible, Ram said, there are opportunities such as that pursued by Suriname.

Suriname, a CDB borrowing member country, signed a RMB swap agreement with China in March 2015. It was one of 35 bilateral swaps that the People's Bank of China signed with overseas central banks and monetary authorities in pursuit of its policy goal to internationalise the RMB.

For Suriname, the total maximum value of its swap was one billion yuan. The agreement facilitated foreign exchange for importers of Chinese goods.

"Given that imports from China accounted for US$224 million in 2014, or 11 per cent of Suriname's import bill, this swap agreement brings considerable relief to importers who traditionally relied on the availability of US dollars to facilitate trade with China," Nam said.

CDB President Dr Warren Smith said at the July conference on the renminbi that now that Caribbean economies are recipients of foreign direct investments flows or trade flows denominated in the Chinese currency, they can now conduct transactions using Chinese banks as correspondent partners, through cross-border interbank payment systems - alleviating the need for traditional relationships underpinned by a western banking networks.

Ram pointed to China UnionPay as "one of the fastest-growing payment card systems in the world, "saying it was accepted" in over 140 countries and accounts for about 7.7 per cent of worldwide card transactions".