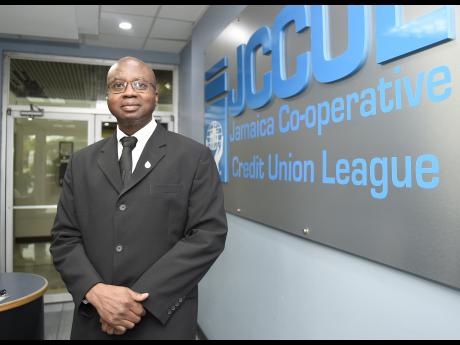 Gladstone Taylor
General Manager Glenworth Francis stands next to the JCCUL sign at the offices of the Jamaica Co-operative Credit Union League on Wednesday, August 30.

The reform of the credit union market has taken a new turn with regulators having agreed that the movement needs to be codified under its own statute.

It comes 18 years into consultations that have been underpinned by a strategy of devising regulations for the sector under the current banking laws, and was the basis on which the credit unions had been restructuring their operations over the years.

That remained the expectation up to January of this year, when the Jamaica Co-operative Credit Union League (JCCUL), the umbrella unit for the movement, was saying it expected that finally the community banks would have transitioned to central bank oversight in June.

But now JCCUL General Manager Glenworth Francis says the authorities have finally been convinced, after nearly two decades, that they were taking the wrong approach and have agreed to the drafting of a statue for the movement.

"We said it from the beginning," Francis declared, noting that it was one of their recommendations when formal negotiations began back in 2000 to transition the credit unions to central bank oversight.

He said it was always their position that the proposed regulations would interfere down the line with the Co-operative Societies Act, the main piece of enabling legislation for credit unions.

"The truth is that a number of areas of the Co-operative Societies Act were being subsumed by the proposed regulations. I can't see where it is possible that a set of regulations can supersede an act," Francis told the Financial Gleaner.

Responses to requests for comment from monetary authority and regulator Bank of Jamaica (BOJ) on why they agreed to changing legislative tactics did not arrive in time for publication. In January, BOJ Deputy Governor Maurene Simms had said regulations to govern the credit unions would have been issued pursuant to Section 34F of the Bank of Jamaica Act.

Credit unions were gazetted as 'Special Deposit Taking Institutions' in July 1999 by then Finance Minister Dr Omar Davies, paving the way for the reforms and transition to Bank of Jamaica oversight. Deposit-taking institutions is the broad categorisation for the different types of banking outfits supervised by BOJ.

The new law is expected to be called the Credit Union Act. Francis says the agreed regulations have gone back to the parliamentary draughtsman to be converted to statute with its own regulations.

The legislative process is expected to be finalised by year end, while implementation of the new law will extend into next year, according to Francis. It means the long-standing head of JCCUL won't get to see the reforms completed before his retirement, scheduled for the end of 2017.

"We know that March of 2018 is the deadline for implementation of the new regime," he told the Financial Gleaner. "I would therefore want to feel that very soon, we should have a draft for review before it goes to Parliament so that it can be passed before the year is ended."

JCCUL has been the de facto regulator of the movement since its establishment in 1942. Part of that function included the creation of a stabilisation fund, the Stab Fund, in 1962, used to rescue or cushion faltering credit unions. Francis was not prepared to disclose the current value of the fund.

However, once credit unions transition to BOJ supervision, they are eligible for participation in the insurance scheme for banks operated by Jamaica Deposit Insurance Corporation (JDIC).

Francis says JCCUL has not yet decided what will become of the stabilisation fund after the transition.

"The Stab Fund is there," he said. "The JDIC will provide insurance coverage. The credit union movement is yet to decide how the fund will be treated afterwards."

He agreed that one possibility would be for some of the money in the Stab Fund to be used to prepay premiums on deposit insurance on behalf of credit unions.

Over the years since the reform programme began, the credit union movement has shrunk from 43 to 30, after a series of mergers meant to shore up capital bases to more align with the BOJ's requirements.

Some of the concessions negotiated by JCCUL included guarantees about capital formation, and the lifting of the 10 per cent limit on secured loans.

Once legislation is passed, the BOJ will move next to licensing the credit unions. Simms previously said JDIC membership was a condition of licensing.

The credit union movement has a membership base of under one million, whose savings are estimated at $78 billion amid total assets of $100 billion up to July of this year. The community banks manage a loan pool valued at $69 billion.