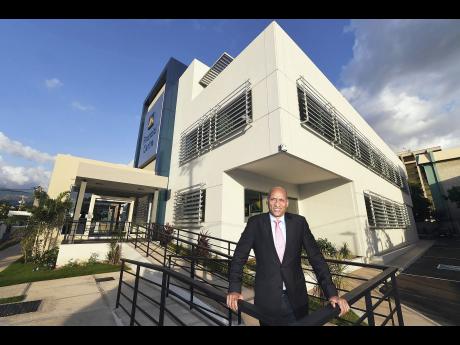 Allan Lewis, who stepped into the role of managing director of JN Fund Managers Limited, JNFM, in January, is eyeing the mutual fund and investment banking portfolios for growth over the next three years.

JN Mutual Funds, which is managed by JNFM, has accumulated approximately $1.5 billion in just over eight months of its debut in December 2016. JNFM also brokered its first listing on the stock market months into obtaining its stockbrokerage licence from the Jamaica Stock Exchange.

Lewis says the arrangement of the Stationary & Office Supplies initial public offering has piqued the interest of other corporate clients seeking financing solutions, but said none of the deals lined up were candidates for the junior market.

Like other financial houses, JNFM is diversifying away from retail repos to more fee-based services, but collateral pledged for resale agreements inched up marginally this year to $24.8 billion, compared to $24.2 billion in 2016. Lewis said, however, that pensions and other assets under management, as well as investment banking are now growing faster than repos.

The stationery company arrangement was the most tangible sign of its efforts to date in the investment banking space.

The offer stood out in the market for its more generous allocation of shares for public subscription. Whereas the general public often gets less than 10 per cent of a float, the SOS offer allotted them nearly 64 per cent, or 31.87 million of 50 million shares, shared among 934 investors, according to market disclosures. JNFM clients got one-fifth of the allotment or 10 million shares, shared among 240 clients.

Lewis said it was largely the directors of SOS who decided on the allotment of shares. He adds that the largest allotment to any one JNFM client was 76,650 shares, and that the distribution of SOS shares was done on an equitable basis that, in the long run, was likely to attract not detract from new business.

"We wanted to achieve the most broad-based allocation," Lewis commented, while noting that 75 per cent of applicants received their full subscription.

Overall, shares were allotted to 1,216 investors, inclusive of SOS staff. Lewis said JNFM picked up 200 new clients as a result of the offer.

JNFM is a member of the Jamaica National Group, to which it contributed over $400 million of profit at year ending March 2017. Lewis manages a company worth more than $28 billion by assets, and which otherwise also oversees more than $50 billion of funds on behalf of clients.

Profit spiked from $262 million to $408 million, largely due to liquidation of some investments.

Lewis said that while JNFM was being affected by competition, he still sees prospect for growth, due to the unique characteristics of the JN Group and its "very low fee" structures, which extend to the investment banking services offered by the investment arm.

From that comes a 3-P strategy.

"Our focus is to be proud, principled and productive by understanding and being responsive to the need [of clients]," he said.

The mutual funds operation launched with five funds, four denominated in Jamaican dollars and one in US dollars. Lewis said the company was preparing to roll out new products, but would not comment on specifics pending approval from the Financial Services Commission.