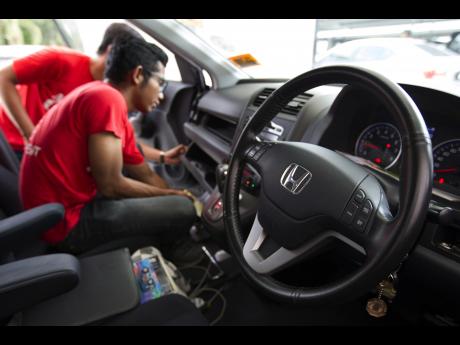 AP
In this November 20, 2016 file photo, a Honda technician works on an airbag during a free airbag replacement event in Kuala Lumpur, Malaysia. (AP)

Honda and some of the people suing the company over faulty Takata air bag inflators have agreed to a US$605 million settlement.

The settlement, which still must be approved by a federal judge, covers owners of 16.5 million Honda and Acura vehicles with the inflators dating back to 2001. They could get up to US$500.

Under the deal, Honda gets credit for spending US$121 million on rental cars for customers who had to wait for parts. That leaves US$484 million. Of that, Honda will spend as much as US$199 million over four years finding owners with unrepaired cars and encouraging them to get the inflators replaced.

The rest goes to attorney fees and to reimburse owners for expenses such as rental cars and lost wages. Owners will have to apply to a court-appointed administrator to get money. They also can make claims that their cars dropped in value. If money is left after other expenses, owners could the US$500.

Takata inflators can explode with too much force, blowing apart a metal canister and spewing shrapnel. At least 19 people have been killed worldwide due to the problem, which touched off the largest auto recall in United States history involving up to 69 million inflators.

NO CONTEST TO APPLICATION

Honda expects customers will get over US$80 million. The company said it agreed not to contest an application by plaintiffs' attorneys for fees of up to 30 per cent of the settlement, for a total of US$181.5 million.

US District Judge Federico Moreno in Miami will make the final decision on where the money will go.

Plaintiffs' lawyers already have settled with Toyota, BMW, Mazda, Subaru and Nissan and are pursuing claims against other automakers.

Information on how to apply for settlement money can be obtained at www.autoairbagsettlement.com