Barita not selling out to rival 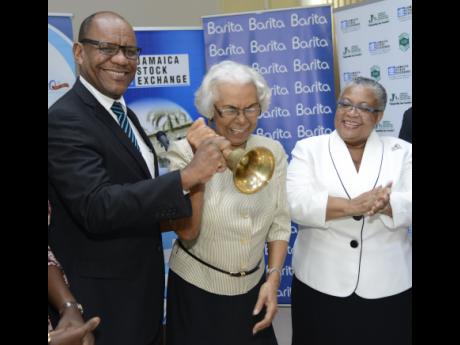 On the face of it, the disclosure eliminates aggressive players in the financial-services sector.

"The buyer is not a competitor. It is a group. I can't say much more, but it is a group," Lewin told the Financial Gleaner at the bell-ring ceremony at the Jamaica Stock Exchange on Thursday to mark the company's 40th year as a brokerage.

"There will be one offer," said the company founder and chairman, whose holdings amount to 76 per cent.

She will require the acquiring company to keep BIL as a going concern rather than dismantle the company, which has a client base of around 20,000 and has $30 billion in funds under management.

"One of the stipulations is to continue with the business. I have too many good clients, and it is a part of the deal to keep the business and not shut it down. And it's not a competitor, these are new people - so they will," she reasoned.

Humphries-Lewin previously said she expects to stay on at Barita through its transition to the new owners, but will then retire from the financial sector after five decades. She will continue in business, however, as a housing developer. She's already built three homes.

Humphries-Lewin founded Barita in 1977 and remains its chairman. Although BIL is Jamaica's oldest stockbrokerage, the company itself did not list on the Jamaica Stock Exchange until 2010. The BIL stock traded at $8.99 on Thursday, valuing the company at some $3.9 billion. The price of the stock has shot up by almost two dollars since the takeover bid was disclosed in August.

BIL is a primary dealer and a cambio dealer operating with a staff complement of more than 80 professionals from offices in New Kingston, Mandeville and Montego Bay. The company remains one of the few financial entities founded and led by a woman.

Humphries-Lewin previously said that for nearly 20 years, Barita has been in various discussions with prospective investors on an outright sale or partnership, but the timing just was not right for a deal - until now.