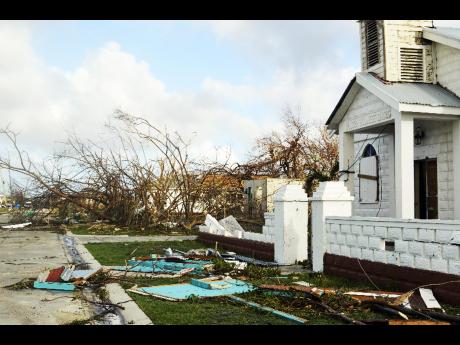 AP
In this Thursday, September 7, 2017 photo, damaged structures in Barbuda attest to the devastation wreaked on the tiny island by Hurricane Irma.

Many column inches in the traditional print media and social media plus lots of minutes of airtime on television and cable news were devoted to the impacts that Hurricane Harvey had on Texas.

Even before the effects of that hurricane were fully absorbed, many islands in the Caribbean and the State of Florida were being threatened by Hurricane Irma and Hurricane JosÈ in quick succession.

At the time of writing, a Caribbean360.com report indicated that Category 5 Hurricane Irma left "a trail of death and destruction that only started to become clear late Wednesday".

Ten persons were dead, and Barbuda and the French Islands of St Martin and Saint Barthelemy were almost totally devastated. The US Virgin Islands and Puerto Rico were also affected. Irma is also likely to cause harm in the Turks & Caicos Islands and The Bahamas.

And if that was not enough, JosÈ is not far behind Irma.

This column is about risks and insurance. In the wake of these natural catastrophes, I decided to use my soapbox to explore what lessons Jamaica could learn. This newspaper editorial team, however, beat me to the punch. Last Thursday's Gleaner headline, 'Hurricane Irma packs lessons for Ja', nearly led me to abandon that plan.

The context for Thursday's article was very narrow. It recorded the opinions of two local technocrats. The piece was accompanied by a photo that was taken at an event that took place at Jamaica House at the start of this year's hurricane season.

Strategies to create prosperity and spur economic growth are at the centre of the present administration's goals. The new Ministry of Economic Growth & Job Creation, one of the functions of the Office of the Prime Minister, is proof of that fact.

The setting up of an Economic Growth Council is consistent with that purpose. The aim of the council, which was formed last year, is that Jamaica achieves five per cent growth in gross domestic product by 2020.

Strategies being pursued by government to create economic growth and job creation will come to nothing in the short to medium term if Jamaica was affected by a hurricane like Irma. For example, Hurricane Gilbert, a Category 3 storm when it made landfall in September 1988, was estimated to have caused damage to "crops, buildings, houses, roads, and small aircraft" of US$4 billion.

The May 2017 floods by comparison, were estimated to have caused economic losses of J$4 billion and contributed to a decline in economic growth. Economic losses caused by a Category 5 event this year will top the Gilbert losses.

Technocrats at the Planning Institute of Jamaica and the International Monetary Fund take a broader view of the impact of natural disasters than the experts in The Gleaner's article. The head of the institute, according to information on its website, linked the occurrence of disaster events to economic downturn. He said, according to information on its website, that Jamaica's vulnerability to weather conditions a phrase that perhaps unintentionally excludes earthquakes "could negatively impact" future economic growth.

The statement by Clifford Mahlung, a "retired meteorologist and seasoned climate change negotiator for Jamaica", in reference to Hurricane Harvey's impact on Texas, is of even more significance when it is viewed in a broader framework.

"What we are seeing is that even where you have the resources and legislation and policies in place, these systems are now so powerful that they have become overwhelming. A developed country (like the US) will take years to recover ... imagine what poorer countries like Jamaica would go through," said Mr Mahlung. " ... Were we to be impacted by one of these Category Five systems ... we are likely to receive less donor support".

Mr Mahlung is right on some points and wrong on others.

First, the State of Texas is dependent on the US Federal Government for financial resources for disaster relief. Those funds do not come from the resources of the state.

Second, the city of Houston is sited on a coastal plain. Downtown Houston is about 50 feet above sea level at its lowest and 125 feet at the highest. Surface water in the Houston region consists of lakes, rivers, and an extensive system of bayous and man-made canals that are part of the rainwater run-off management system. The flooding that occurred during and after Hurricane Harvey was waiting to happen.

The City of Houston website says that its "flat terrain, large amounts of impervious cover (concrete), slowly-absorbing soil, and potential for thunderstorms, tropical storms, and hurricanes all combine to form ideal conditions for flooding. Due to its humid-subtropical climate and proximity to the coast, Houston is susceptible to a large amount of rainfall that is often too great for its infrastructure and bayous to handle. Once the city's ditch and storm sewer networks are inundated with storm-water run-off, streets become secondary drainage facilities."

The flooding caused by Harvey in Houston was the third 500-year event in the last three years. A 500-year flood is something that has a 1-in-500 chance of happening in any given year. Cities like Rotterdam and Antwerp in Holland, in contrast, were designed to withstand one-in-10,000-year floods.

As a poor country with scarce financial resources that is exposed to destructive events like hurricanes and earthquakes, our technocrats and policymakers have a duty to make wise choices based on available facts.

In my column, "Inadequate risk management has costly outcomes", published June 4, 2017, I quoted comments from CCRIF CEO Isaac Anthony, which are relevant. He said "countries in the region should become resilient by enhancing the capacity of governments to take a portfolio view of risks and include all risk categories -technical, economic, natural and social and their interdependence in a geographic context."

He also stated that a key part of this new integrated risk-management framework would be to establish country risk officers.

Three months have passed since that article was written. Have the folks at Ministry of Economic Growth and Job Creation taken action on that bit of advice as yet?