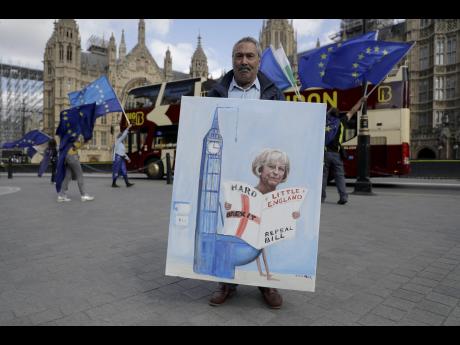 AP
Political artist Kaya Mar poses for photographs with one of his paintings on the repeal bill next to an anti-Brexit protest outside the Houses of Parliament in London, Monday, September 11, 2017.

British lawmakers voted a key Brexit bill past its first big hurdle in Parliament early Tuesday. But many legislators branded the bill a government power grab, and vowed to change it before it becomes law.

After a debate that stretched past midnight, the House of Commons backed the European Union (Withdrawal) Bill by a vote of 326 to 290. That means lawmakers approve the bill in principle, but the government will now face attempts to amend it before a final vote later this year.

A key plank in the Conservative government's Brexit plans, the bill aims to convert thousands of EU laws and regulations into United Kingdom domestic laws on the day it leaves the bloc in March 2019.

Prime Minister Theresa May said the measure provides "certainty and clarity" ahead of the divorce. Brexit Secretary David Davis said that without it, the UK faces "a chaotic exit from the European Union".

But the opposition says it would give the government dangerous new powers to amend laws without parliamentary scrutiny.

Since Britain joined the EU in 1973, thousands of EU laws and regulations have come to operate in the UK, covering everything from environmental protection to employment rules.

Justice Secretary David Lidington told lawmakers that the bill is needed to ensure Britain has "a functioning and coherent statute book and regulatory system the day we leave".

It calls for incorporating all EU laws into UK statutes so they can then be kept, amended or scrapped by Britain's Parliament. The government says that will fulfil the promise of anti-EU campaigners during last year's referendum to "take back control" of the country from Brussels to London.

Critics say the bill gives the government too much power, because it allows ministers to fix "deficiencies" in EU law without the parliamentary scrutiny usually needed to make or amend legislation. Such measures are often referred to as "Henry VIII powers" after the 16th century king's bid to legislate by proclamation.

Opponents worry the government could use the powers to water down environmental standards, employment regulations or human rights protections.

Labour Party lawmaker Chris Bryant said the bill "pretends to bring back power to this country, but it actually represents the biggest peacetime power grab by the executive over the legislature, by the government over Parliament, in 100 years".

Members of Labour, the main opposition party, were ordered by their leader to vote against the bill. A few rebelled or abstained, wary of being seen as trying to frustrate voters' decision to leave the EU.

Pro-EU lawmakers from the governing Conservatives largely backed the bill, saying they would try to amend it at the forthcoming committee stage.