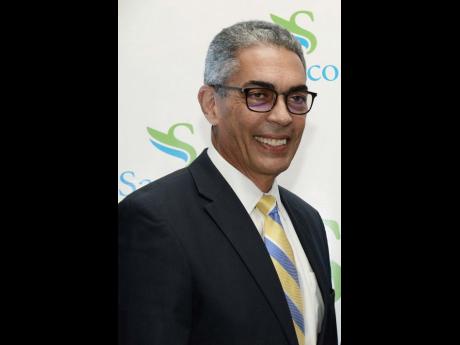 Jermaine Barnaby
Sagicor Group Jamaica chairman Richard Byles, to be inducted into the PSOJ hall of fame on November 13.

Chairman of Sagicor Group Jamaica Richard Owen Byles will join other pantheons of business as the 25th inductee in the Private Sector Hall of Fame in November.

The Private Sector Organisation of Jamaica announced his selection on Tuesday, having labelled Byles a decisive and results-oriented leader whose impact has been felt in the national economy and in the streamlining of public policy to support private and public-sector efficiency.

Byles headed Jamaica's largest insurance conglomerate for 13 years up to his retirement in May. Over the years, he has served both his company and the trade organisation that represents corporate Jamaica, and has taken on roles that form a nexus between public policy, business and the economy.

"Throughout his years of direct service to the PSOJ, Mr Byles has been one of the unifying voices advocating strongly in support of private sector policies that would fuel the necessary conditions for the growth and economic development of Jamaica," the trade association said.

As former president and chief executive officer of Sagicor Group, Byles' leadership has been characterised by a series of successful mergers, acquisitions and divestments, which have led to massive increases in profits and net worth of the organisation, as well as contributed to the entity's amplified brand awareness.

Before Sagicor, he was president and chief executive officer of Pan-Jamaican Investment Trust, now PanJam Investments. He led PanJam's largest subsidiary, First Life Insurance Company Limited, through the financial crisis of the 1990s.

One of Byles most high-profile public roles was co-chairman of Jamaica's Economic Programme Oversight Committee (EPOC), a body that was designed to maintain watch on the rescue programme negotiated with the International Monetary Fund.

Byles gave the committee high visibility through monthly briefings after each of its deliberations, which in turn cemented trust in government's fidelity to the reform programme.

In that regard, the PSOJ noted that the unparalleled success of EPOC has led to it becoming a standard enquired about, and modelled by, other countries as a way to address their own fiscal challenges.

Each year, since 1992, the PSOJ pays tribute to a private sector leader who has made innovative and sustained contributions to the development of that segment of the economy over a minimum of 25 years, has demonstrated in-depth knowledge of the industry in which his/her company operates, and demonstrates an unwavering commitment to the advancement of his/her industry and to national development.