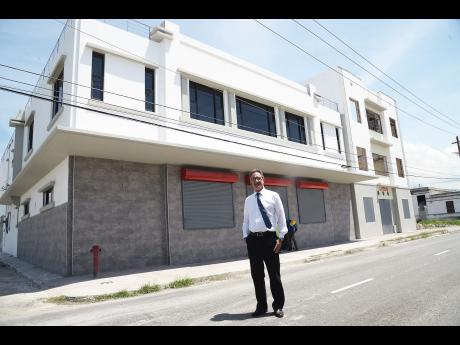 Jermaine Barnaby
Andrew Issa stands in front of a building he is renovating through Admiralty Sword Limited, at 59 Harbour Street in Kingston on Wednesday, September 13, 2017.

Realtor Andrew Issa is speculating that the value of downtown Kingston real estate is about to escalate as ongoing investments from public and private entities take shape, and is sinking money into property to await the payoff.

Two headquarters projects are under way, one by GraceKennedy Limited and another by the government which is building a complex for the Ministry of Foreign Affairs & Foreign Trade, both on the waterfront.

Issa's Coldwell Banker Realty Jamaica has set up a sister company, Admiralty Sword Limited, to buy, develop and hold property, which is "certain to appreciate" once those two major projects are complete, he said.

The new company is taking advantage of the incentives offered to developers in the capital in hopes of injecting new life into its dilapidated infrastructure.

The urban incentive programme managed by the Urban Development Corporation offers tax relief on capital investments in either land or buildings, whether residential or commercial. There are three types of incentives an urban renewal bond, an investment tax credit and tax free rental income.

Through Admiralty, Issa has invested in two buildings that sit side by side at Harbour Street, which are now being renovated for rental.

"The buildings have some good history - one of them was the Old Lipton Tea Factory; one was the LS Duhaney building which used to have all types of businesses. You should see the old tile sand, the mouldings you would really see the charm of it," he said.

"The whole idea is to find tenants and if a possible also open an office downtown. All space will be rented. We are going to hold those properties because when Grace is finished and the Ministry of Foreign Affairs is finished that whole area is going to come alive. It will really look great when it's done."

The properties at Harbour Street were purchased for $40 million, but Issa otherwise declined to reveal the full scale of the investment he is making to bring them to market, which includes the addition of 50 parking spaces. He plans to rent at rates "20 per cent less than uptown".

As to the prospects for rental, Issa said there are prospects but he was not ready to sign tenants.

"We did have interest, but we were not pressing it because we are not 100 per cent finished. Next door we had to bring in flooring - metal sheeting from overseas - and then we had to put a roof on that. Ideally, we hope to have both buildings rented for January 1, 2018," he said.

Admiralty doesn't have any new acquisitions lined up, but Issa said that's largely because they cannot locate the owners of abandoned downtown properties.