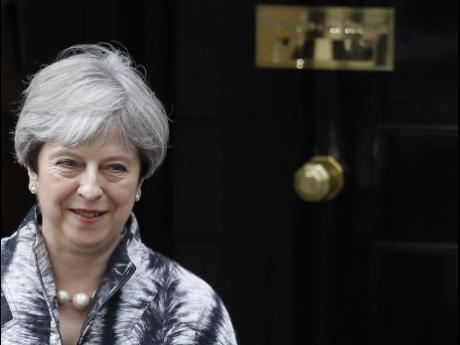 Prime Minister Theresa May said on Monday there is a positive "new dynamic" in Brexit talks, with the United Kingdom and the European Union nearing agreement on the rights of four million citizens whose lives will be affected by the split.

May urged European Union (EU) officials to show "leadership and flexibility" in negotiations on Britain's exit, saying "the ball is in their court".

"But I am optimistic it will receive a positive response," she told lawmakers in the House of Commons. "I believe we can prove the doomsayers wrong."

The EU, however, lobbed the ball straight back. European Commission spokesman Margaritis Schinas said the responsibility for progress is "entirely in the UK court".

More than a year has passed since the UK voted to leave the EU, and six months since the UK triggered the two-year countdown to its EU exit. A fifth round of divorce negotiations opened Monday in Brussels, with both sides frustrated by the lack of progress.

May insisted "there is a new dynamic in the negotiations" since her major Brexit speech in Florence, Italy, last month.

In that speech, May said Britain would be willing to abide by EU rules and pay into its coffers for two years after Brexit in 2019.

She also signalled Britain would pay what it owes to settle financial commitments it has made to the bloc, but without naming a figure.

EU leaders have called her suggestions positive but asked for more details. None were forthcoming in May's statement on Monday.

The UK is increasingly anxious to move talks on to discussing future trade relations, but so far, the EU says there hasn't been "sufficient progress" on the major divorce terms the size of the Brexit bill, the status of the border between Ireland and Northern Ireland and the rights of three million EU citizens living in Britain and 1 million Britons in other member states.

May said "there is considerable agreement" between the UK and the bloc on citizens' rights.

"So I hope our negotiating teams can now reach full agreement quickly," she said.

Schinas, the EU spokesman, said "there has been so far no solution found on step one, which is the divorce proceedings".

"So the ball is entirely in the UK court for the rest to happen," he said.

Danish Foreign Minister Kristian Jensen, however, called for compromise, saying "this will never be a 100 per cent win for one side or the other side".

Jensen said the sides "are now on the same page", and "it is rather important we get on to a more close and more speedy process of concluding some of the issues".

May addressed Parliament on its first day back since her disastrous speech to the Conservative conference last week, which saw her bedevilled by a prankster, a sore throat, and a malfunctioning set.

The debacle intensified debate about whether May can unite her fractious government - divided between Brexit enthusiasts and more reluctant leavers - and how long she can survive as prime minister.

Labour Party leader Jeremy Corbyn accused the government of making a mess of the Brexit negotiations.

"Fifteen months on from the referendum, we're still no clearer what the future of this country will look like," he said.