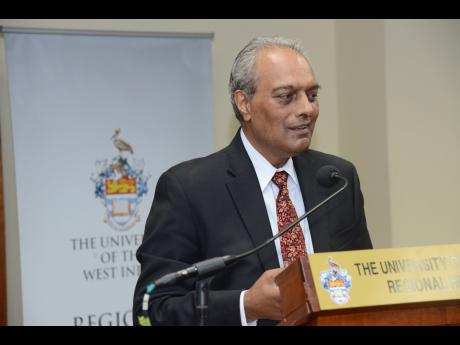 It would be an incredible achievement if the Jamaican economy realises annual growth of 2.8 per cent over the next five years, having expanded by an average 0.5 per cent over the past decade, according to economist Inder Ruprah.

Referring to the prediction by the International Monetary Fund in its World Economic Outlook, he said that it implies that total factor productivity will suddenly grow at more than three per cent per annum.

Ruprah, who until recently was a regional economic adviser attached to the Inter-American Development Bank, suggested that a desirable rate of growth rate should be one which provides full employment for new entrants to the labour market, including those leaving schools and universities, as well as persons who are currently unemployed.

"So the desirable economic growth rate to absorb new entrants into the labour force is about three per cent per annum," said the economist.

Against the background of suggestions made by the Economic Growth Council, ECG, to achieve growth of five per cent in four years, Ruprah said the Council probably has the most comprehensive heuristic explanation about the importance of increasing productivity and the means of doing it, none of which he disagreed with.

'If you look at analyses over the years, all those things have been mentioned in relation to the Jamaican economy," he said while addressing a forum on growth and productivity organised by the Acorn Group, with support from the Inter-American Development Bank, on Tuesday.

"But without being too facetious, if everything matters, nothing matters. It is true that all those (including crime and violence) are contributing to limiting economic growth and employment generation in Jamaica," Ruprah said.

The problem with 'everything matters' is that it leads to relative inaction, where everything is continuously discussed, ad nauseam, he said, whereas the implementation of even one element, done deeply and quickly, could contribute positively to economic growth.

Ruprah suggested that Jamaica is trapped in two forces. One is hysteresis, an event in the economy that persists into the future even after the factors that led to that event have been removed.

"So you have a crisis, external or internal. what is means is that after the crisis and you start growing again, the rate of growth is lower," said the economic adviser. "The growth rate of productive capacity in the Jamaican economy has been steadily declining. The trend in growth demonstrates hysteresis," he added.

The other is sclerosis, the argument that an economy is dominated by rent-extracting powerful groups in society, a group which a former Trinidadian finance minister referred to as the alliance against growth.

"The point about this extraction of rents implies a misallocation of resources, which also contribute to lower economic growth, although in the last four years Jamaica has made credible progress by the elimination of tax exemptions," he said.

Jamaica has a labour force of more than 1.3 million of which 12.2 per cent are unemployed.