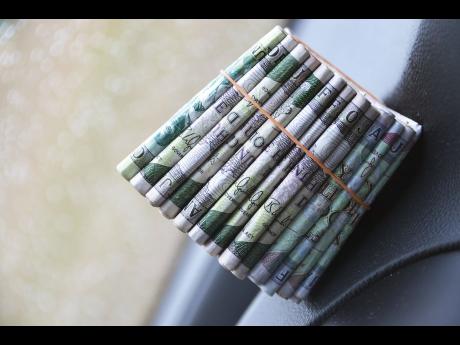 A stack of Jamaican currency

Financial fraud expert Robin Sykes is suggesting that a portion of the criminal proceeds confiscated by the State be given to Jamaica's under-resourced courts and the broader justice system.

Under the Proceeds of Crime Act the courts can order that the assets of the convicted felon be turned over to the State. Information on the value of such seizures, since POCA's passage a decade ago, was not immediately available.

Jamaica's courts are allocated around $2.5 billion annually in the national Budget, but the system has long been low on funding for upkeep of courthouses, and short on staff.

"We are recommending asset incentivisation," said Robin Sykes, the chief technical director of the Financial Investigations Division, FID, and chair of the cross-agency National Anti-Money Laundering Committee - saying later that the law already allows for this. In this way, he said, the justice system - inclusive of law enforcement, prosecutions and the judiciary - could develop a "war chest for training, equipment and business travel".

The 'incentivisation' suggestion could well be controversial, given that some in the judiciary consider the confiscation of criminal assets as akin to punishing the convicted twice.

At the annual Anti-Money Laundering/ Counter-Financing of Terrorism Conference this week, the technocrat also spoke to a need for widespread cultural change among police and judges who have a bias against AML laws, thereby posing problems for investigation and prosecution. Resources, he added, were needed for engagement of law enforcement and the judiciary.

POCA was passed by Parliament in 2007 to replace the Money Laundering Act. It gives the commissioner of lands the authority to take ownership of seized property on behalf of the State. And it also established an asset recovery agency - a job that falls to FID.

FID itself was established by the Financial Investigations Act to investigate financial crimes.

Sykes said FID is already pursuing a project with the assistance of the local judiciary and the British Council, which will become "a road map for the judiciary" - referred to as the POCA Rules of Court - to assist judges and lawyers in procedural matters involving applications for cash seizures and post-conviction forfeiture, among others.

"Seizures are working. What is not working is convictions and jail time," said the technocrat, who also noted that Jamaica was weak on investigation and prosecution as well.

One strategy being considered is whether to prosecute the cases in civil or criminal court, he said, to get around the bias of clerks of court and trial judges.

"Trial judges are not comfortable with POCA. They feel that individuals are being punished twice. Often, as well, there is a challenge in answering the judges' demand for evidence of the illegal activity attached to the proceeds of crime charge," said Sykes.

"When a decision is made to accept a plea, it is the proceeds of crime offence which is dropped. The FID has been slapped in court several times because of the judge's bias. You just have to push through that," he said.

FID has 20 police officers attached to the division.

"When they are doing a drug bust they are not considering proceeds of crime ... so they forget about seizing the boat as well," Sykes said. But, for proceeds of crime to be made to work, he added, the system has to follow through on both small and sophisticated cases whether it is the van used by a praedial larcenist or the boat used by a drug smuggler.

In the last Mutual Evaluation Report for Jamaica in January 2017, it was recommended that Jamaica consider establishing a dedicated criminal court to deal exclusively with money laundering cases; that financial intelligence be better utilised in money-laundering cases; and that properly trained personnel be provided to prosecute offences.