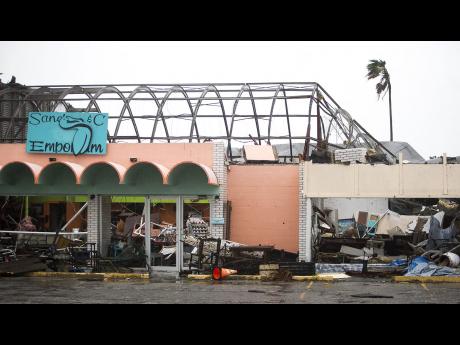 AP
The remains of a store after Hurricane Harvey ripped through Rockport, Texas, in September.

What impact will the 2017 Atlantic hurricane season have on the cost of property insurance in Jamaica and the rest of the Caribbean in 2018? The season officially ended on November 30. Also, many companies and organisations have already began planning for their next financial year. Will the price of insurance increase and, if so, by how much?

A UPI report states that "... eighteen named storms were recorded in 2017 from Tropical Storm Arlene in April to Tropical Storm Rina in November. Ten became hurricanes, and six of those attained "major" classification (category 3 strength or greater)." That number exceeded the predictions of the National Oceanic and Atmospheric Administration. This year was the most active hurricane season in seven years.

2017 set another record. According to the same report, in August, five out of six hurricanes Harvey, Irma, Jose, Lee and Maria became "major" within 30 days. Three of them Harvey, Irma and Jose formed consecutively. Some experts have said that "this year's storms caused nearly $370 billion in damage worldwide".

The perspectives of local experts are consistent with those overseas. In her review of 2017, Mrs Saundra Bailey, chief operations officer of CGM Gallagher Group, insurance and reinsurance brokers, a company that trades regionally, says many of the same things as her foreign counterparts. It estimates that it will be involved in the settlement of HIM claims amounting to more than US$100 million. "The ... season will never be forgotten in the Caribbean. HIM (Harvey, Irma and Maria) have left a wave of uncertainty in the insurance sector not only in the region, but (also) in the international reinsurance market." Regional insurance companies buy substantial amounts of reinsurance overseas in order offer insurance against hurricanes and earthquakes to their policyholders. In many cases, 80-90 cents of every $1 of premium collected ends up in the hands of reinsurers.

Successive devastating incidents like the ones earlier this year which swept through the Caribbean and affected the US Gulf Coasts are viewed by industry specialists as either earnings events or capital events. Earnings events are temporary. They affect the financial results during a given reporting period, like a quarter or a financial year. A capital event is more serious. It weakens the reinsurers' capital. That effect can only be fixed by the infusion of more capital if the entity continues to trade and wants to retain market confidence. Some experts say that the 2017 hurricane payouts will constitute a capital event for several reinsurance companies and an earning event for others.

Mrs Bailey is forecasting that "The combined effects of HIM, the earthquakes in Mexico and other losses around the world will cause the property rates to harden," next year. Even though Jamaica was not hit, she says that "Reinsurers have telegraphed to regional insurers, including those in Jamaica, rate increases ranging anywhere between 20 and 50 per cent." The increase will come into effect on January 1.

Reinsurers are also pushing for other changes. Currently, property policies exclude the first two per cent of each loss per item arising from catastrophes (defined as hurricane, flood, fire and earthquake) per insured item. The excluded amount is referred to as the deductible or excess. If reinsurers have their way, according to Mrs Bailey, the deductible will apply to the total amount that is insured at each location. Policyholders will be required to assume a greater share of the risk burden in addition to paying more.

Mrs Bailey is not all doom and gloom. Even though dark clouds cover the skies, she sees silver linings. Given the heavy dependence of regional insurers on overseas reinsurance markets, the situation could have been much worse. Had the supply of reinsurance capacity contracted because of the catastrophe events over the last six months, as happened in the past, projected price rises for 2018 would have been higher. She anticipates that "there will not be a shortage of capacity. Where there is ample or over supply of capacity, the competitive forces of supply and demand will provide clients and

their brokers with a real opportunity to negotiate best rates and terms. For larger risks currently requiring support in the overseas markets, the responses have been mixed. Reinsurers are reluctant to quote and keep the quotes open on property risks with renewal dates in the first quarter of 2018. January is the main renewal month for treaties and discussions between insurers and reinsurers are underway."

Markets tend to behave in similar ways. Prices go up and they go down. They can eventually enter a state of economic equilibrium. Mrs Bailey is aware of this. She concludes: "As the impact of HIM becomes clearer, the market will settle down. The region has benefited from the longest soft market cycle in modern history. Come 2018, it will not be business as usual. We will see some amount of price adjustments, but clients (particularly those in the corporate sector) are now far more sophisticated and will ensure that they get the best deal ... We are personally upbeat about the future and from what may appear to some as a crisis, we see it as a window of opportunity. Our value is not just price alone, even though it is an important element of our value proposition. We are committed to finding the best solutions for our clients; it is a time to be creative and to leverage all our local and international partnerships for their benefit."

I agree. I could not have expressed those ideas any better based on the research that I have carried out.