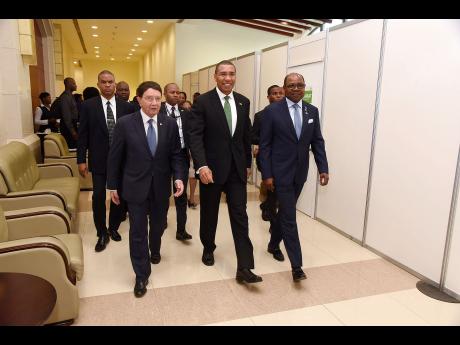 A new and potentially challenging way of thinking about the future of tourism is evolving. It sees the industry as having an economic purpose that is quite different from the role it presently plays in much of the Caribbean.

The new paradigm requires that travel and tourism contribute to development in a sustainable manner, spreading the capital it transfers more equitably and widely in host destinations. It also requires those involved in the delivery of tourism to adapt its product and services in ways that support a broader agenda. It suggests that governments, airlines, hotels, cruise lines and others selling the tourism product look beyond profits and taxation to explore how the sector might become a driver of social change.

This was the overarching theme of the just ended United Nations World Tourism Organisation (UNWTO) conference held in Montego Bay, which was organised with the support of the Jamaican government and its international development partners.

The background to this significant change in thinking about an industry that is largely market driven is a desire to translate travel and tourism's sustained high rates of growth over many years into opportunities to stimulate jobs and growth in multiple sectors.

The new thinking reflects the belief of politicians, international financial institutions, development partners and others, that by harnessing the industry's extensive reach and future capacity to grow, tourism can play a central role in delivering the UN sustainable development goals. These aim to end poverty globally. More pragmatically, it is believed that this thinking can be market driven through the desire of growing numbers of visitors to experience the authentic rather than an homogenised product.

UNLIKE ANY OTHER EVENT

Although the conference was multifaceted, its fundamental purpose was to move forward a developing global inter-governmental consensus on the need to more closely direct the industry's development, so that it is aligned with broader national economic and social objectives. As such the Montego Bay conference was quite unlike any other tourism event seen before in the Caribbean.

It was variously an attempt to look over the horizon in the manner of the annual World Economic Forum in Davos, a recognition that the Caribbean is in a pivotal position as one of the world's most tourism dependent regions to change global thinking, and that the Caribbean stands to benefit in future from concessional development financing if it is related to ensuring tourism's sustainability.

The UNWTO Secretary General, Taleb Rifai, set out the parameters of the new thinking. He told participants that governments and the industry need to ensure that the 1.8 billion individuals globally who travel each year are translated into opportunities for inclusive economic growth, more and better jobs, and opportunities to distribute wealth and share prosperity.

In similar vein, Jamaica's Prime Minister, Andrew Holness observed in his keynote address the need for a new and holistic approach to tourism and development, noting that tourism can "move nations from poverty to prosperity" in ways that ensure that everyone "shares equitably in the benefits of growth".

Later, at a dinner, the President of the Dominican Republic, Danilo Medina, who was paying an official visit to Jamaica, emphasised that he and his country wanted to work with other governments in the region to transform Caribbean tourism so that it drives growth and create quality jobs.

Although the conference was welcome, timely and thought provoking, it is not clear what the response will be to this quasi-statist approach. This is because some cruise lines, big hotel chains, and those who sell the product, despite paying lip service to the ideas discussed, are concerned that implementation may disadvantage them commercially.

Nor is it clear whether all Caribbean governments and ministers genuinely accept the premise, the multi-sectoral inter-dependence implied, or would sign on to a position that would require all new developments in tourism to meet sustainable criteria that result in the income and inputs the industry creates being spread more widely.

Some speakers in Montego Bay described certain Caribbean tourism developments as being akin to plantations. This is the largely academic controversial view which suggests that the post-preference sectoral transformation of Caribbean economies saw tourism simply replicate the agricultural model that previously had only brought benefits to overseas or domestic elites.

However, if the acclaim that greeted these words in both the large and smaller sessions, and other criticism of the 'leave as little behind as possible' approach of the cruise lines is anything to go by, there is substantial popular support for a fundamental change in tourism's economic and social role.

Crucially however, in this context, the conference also heard from leaders of Jamaican, Dominican and Spanish hotel chains who have recognised changing national and visitor sentiment and are rising to the challenge of encouraging development beyond their properties. They spoke about how they are already working through foundations and partnerships, and in one case expressed a willingness to explore on a region-wide basis how their experience of social development programmes might be transferred elsewhere in the region.

At the end of the conference the UNWTO issued a 15-point Montego Bay Declaration. This sets out how the process might move forward between now and 2030.

At present the ideas it contains are being driven globally by some governments, multilateral institutions, and non-governmental organisations. They are also being considered in a commercial setting by more thoughtful hotel groups and those in the industry and its associations who recognise that visitor demand is changing, and that this necessitates a different product and greater social responsibility. Notwithstanding, the UNWTO's ideas are not without their critics.

If the UNTWO declaration is to have legs in a Caribbean context, it now requires discussion and, more generally, the buy-in of the private sector and civil society, and its endorsement by CARICOM and CARIFORUM heads of government. Based on their engagement in the conference, the initiative to achieve this now lies with the governments of Jamaica, St Lucia and the Dominican Republic.