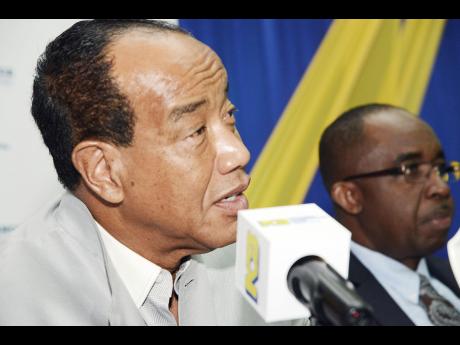 The book value of NCB Financial Group's stake in Clarien Bank, Bermuda, would equate to US$53.6 million (J$6.74 billion), but the entities avoided any financial disclosures in announcing the deal last week.

Clarien Bank holds US$107 million in total equity as at June 2017, its financials indicate. NCB Financial Group announced that it will acquire 50.1 per cent of Clarien Group Limited (CGL), which owns Clarien Bank Limited (CBL), subject to ministerial approval.

Funds managed by Portland Private Equity will hold 17.92 per cent and Edmund Gibbons Limited (EGL) will retain a 31.98 per cent shareholding, a release on the deal stated.

Clarien stated that it received financial advice from Macquarie Capital.

Both NCB and Portland Equity are part of the Michael Lee-Chin-controlled Portland group of companies, which started as a wealth-management business in Canada before expanding into a multinational financial conglomerate. In April 2016, Portland entered into a deal with Clarien to invest US$10 million in the bank for an undisclosed stake. Wednesday Business sought clarity from Portland group director Robert Almeida on whether the 17.9 per cent reflected the group's initial investment.

"Portland Private Equity is pleased with the performance of its investment in Clarien Group Limited, which is performing in line with our investment thesis," responded Almeida to Wednesday Business queries on specific financial information.

The transaction has received the approval of the Bank of Jamaica and a letter of no objection from the Bermuda Monetary Authority.

Completion of the transaction is subject to the approval of the minister of finance under the provisions of the Companies Act 1981 in Bermuda.

"Our investment in Clarien reflects not only our confidence in the quality and value of the bank's expertise, experience, and services, but also those of Bermuda itself. In addition to its unquestioned natural beauty, the island has a natural affinity for business. As home to many of the world's leading financial companies, Bermuda is respected as a stable, sophisticated legal and regulatory jurisdiction well equipped to meet the needs of international high-networth and institutional clients and one that is committed to meeting global standards of compliance, regulation, and transparency," stated NCB President and Group Chief Executive Officer, Patrick Hylton in a release.

Wednesday Business awaits a response from NCB on the financial terms of the deal and how the bank will treat the entity going forward.

"Bermuda is one of the world's premier financial jurisdictions and our alliance with Clarien is consistent with the strategic investments and joint ventures NCB Group identifies as key to growing our regional interests and driving continued growth and shareholder value," Hylton added. "We are committed to contributing to the growth of Bermuda's reputation to attract more business to the island and thereby, create conditions that will benefit the economy as a whole."

Clarien's strength lies with its asset base at $1.1 billion as at December 2016, much of which is liquid, including US$192 million in cash and equivalents and US$161 million in investment securities. While its loans and advances at US$815 million as at June 2017 account for the bulk of its remaining assets, one concern relates to its impaired loans (over 90 days) which totals US$76.6 million or roughly nine 9.0 per cent of its loan portfolio. The size of the bad debts could constrain its ability to rapidly grow loans.

Another area relates to Clarien's annual return on equity, which remains relatively low at roughly 1.0 per cent for its 2016 financial year. Specifically, the bank posted US$1.2 million in net profit for its year ending December 2016 or double the US$522,000 earned a year earlier. Despite the jump in profit, its return on total equity at $106.8 million remained low.

"Our partnership with NCB and Portland reinforces Clarien's position as one of the largest privately held financial institutions in Bermuda. It will enable us to offer a wider range of attractive products to our customers and facilitate the growth that will ultimately provide job security and career opportunities for Bermudians," stated James Gibbons, director of Edmund Gibbons Limited (EGL), CGL and the Bank, said the partnership with NCB strengthens commercial ties. "The Clarien brand will be unchanged and we remain committed to Bermuda, our employees, and our clients. NCB shares our client-focused philosophy and a dedication to providing high-quality services and a superior customer experience," he added.

NCB is the largest and most profitable financial services institution in Jamaica with roots dating back to 1837. Through its banking, wealth management, life and general insurance, and offshore banking subsidiaries, NCB provides a wide array of financial products and services to meet the needs of individual and business clients in Jamaica, the Cayman Islands, Barbados and Trinidad & Tobago. In May 2016, NCB acquired a 29.99 per cent equity interest in Guardian Holdings Limited, the Caribbean's leading insurance company.

In February 2015, EGL acquired a 50 per cent stake in CWH Limited, which when combined with its existing 20 per cent interest in Clarien resulted in EGL becoming the controlling shareholder of Clarien and the ultimate parent company of CBL, according to information posted on the bank's website. In April 2015, EGL reacquired the remaining shares it had previously sold in Clarien and became the 100 per cent owner of CBL.