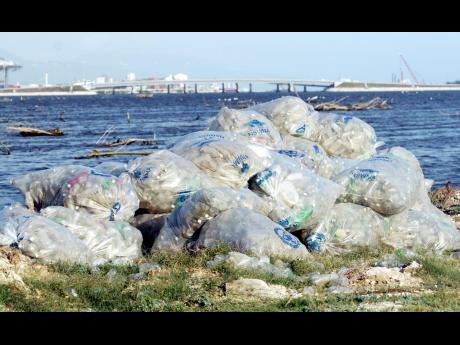 The clashing views on how to deal with plastic pollutants were on display Wednesday, at a think tank forum organised to assess the waste disposal problem that is seen as out of control.

The state-appointed working group on plastic packaging materials has recommended a ban on the use of plastic bags to Cabinet.

But think tank, Caribbean Policy Research Institute (CAPRI) believes it's better to levy a tax on users of plastics.

CAPRI's position is that while bans have disrupted the use of plastics, it is taxation which has reduced usage near the point of elimination. Researcher Desiree Phillips said at the forum 'Choking on Plastics' that CAPRI's research results, which included reviews of best practices in waste management, favoured taxation that is adjusted upwards over time.

However, chairman of the plastic packaging materials working group, Dr Parris Lyew-Ayee, insists that a ban can resolve the deep-rooted problem, and that anything else would be a half-measure.

The working group - including environmental and industry interests and a policy subcommittee - completed its report in September this year on a parliamentary motion calling for a ban on plastic bags below 50-gallon capacity, as well as styrofoam containers, which are not biodegradable.

"The results are for a ban," Lyew-Ayee declared at Wednesday's forum.

"If you want a policy framework, you have to look at the way forward. There can be no half-measures. We are looking at banning this thing altogether. Why? Because a cess does not address the root causes," he said

Phillips noted that across the region and around the world, more and more countries are taking action to address the significant economic and environmental costs associated with plastics.

"The problem with plastics are their durability. Plastics remain in the environment for over 500 years, and end up causing harm and impacting quality of life. They are a major cause of blocked drainage systems and floods," the research officer said.

In Jamaica, the local sugar companies alone have sustained damage estimated at $200 million to $300 million in the last 24 months, she said.

Phillips said that between 2011 and 2015, plastics imports to Jamaica have almost doubled, growing from four million to seven million kilograms. "With one kilograms being the equivalent of 180 bags, around 1.3 billion bags were imported in 2015. That is 500 used by each person in Jamaica," the researcher said.

Reviewing the evidence from bans used in Taiwan, Kenya, Italy, and Rwanda, she said that the result was a significant reduction in the use of plastics, and the creation of a market for reusable bags. She noted, however, that there were side effects.

Small businesses in those jurisdictions rebelled, saying that the ban had increased the cost of doing business. In Rwanda, for example, it led to the emergence of a black market for plastic bags despite the checks and balances.

Phillips added that where fees have been implemented, such as in Botswana and Ireland, they "left the choice of use with the consumer." In Ireland, she said, usage was reduced by 90 per cent, while in Botswana it fell by 50 per cent.

Phillips said that such fees need to be adjusted over time in accordance with behaviour patterns, and can serve as a source of revenue for government.

The challenge with fees, she admitted, lies in implementation. If it is levied at the point of sale, retailers will be required to report on the number of sales and pay taxes to government.

Phillips suggested that plastics could be taxed at source at the ports instead, but there is the danger that the cost would not be passed on to consumers, which would defeat the purpose of the cess.

"We recommend plastic bag fees to be implemented in Jamaica," the researcher concluded, while noting that any policy action should be accompanied by education campaigns and wide-scale access to alternatives, including paper.

Lyew-Ayee said that if there is an agreement on the ban, it would be executed over a timeline of five years.

"This will allow industry interests to get rid of inventory, depreciate stock, change equipment, and begin retooling their operations for alternative products," he said.

"There are lots of alternatives, many ranging from recyclables to reduceables. These things can be more expensive, but demand will build as costs come down."

CORRECTION: This story was updated to correct the name of the CaPRI researcher to Desiree Phillips. She was incorrectly identified as Shanike Smart.