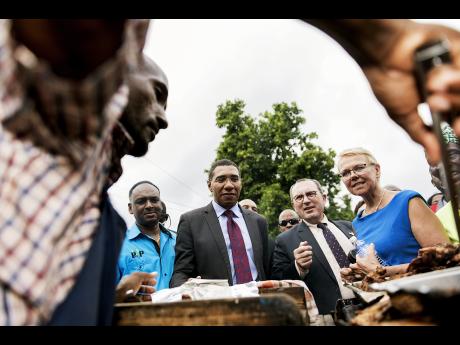 Gladstone Taylor
In this February 2, 2018 Gleaner photo, jerk chicken vendor Orville Goldson prepares a serving of jerked chicken in the foreground, forming a frame for officials in the background, from left, JSIF Managing Director Omar Sweeny, Prime Minister Andrew Holness; Director-General for the International Cooperation and Development Commission Stefano Manservisi, and Head of EU Delegation in Jamaica Ambassador Malgorzata Wasilewska during a tour of Denham Town in Kingston.

At the start of February, Stefano Manservisi, the director general of the European Commission's Development Directorate, delivered a lecture at the Mona campus of the University of the West Indies (UWI).

It was a part of university's Distinguished Open Lectures series. His subject was 'The EU and the Caribbean: A proposal for a modern partnership beyond 2020'.

At the time, the media coverage was weak and subsequent public debate non-existent since there was no official text or press release. This was unfortunate as Mr Manservisi, an important and influential figure, outlined Europe's post 2020 thinking about the relationship that the EU27 will seek with the Caribbean.

In his address, Mr Manservisi made some important points about the way in which the European Commission is thinking about the region in a post-Cotonou and a post-Brexit context. In many respect it is very different to what has gone before and raises difficult questions for the region.

Mr Manservisi suggested that after 2020 when the Cotonou Convention expires, a new and more political form of agreement and development dialogue should evolve between the Caribbean and the EU; one based on shared values and the UN 's Sustainable Development Goals (SDGs).

Five main themes were contained in his remarks.

Because Europe sees its future relationship with the region as being of strategic significance it wishes to determine a more political and holistic way to relate to the region in a global context. Mr Manservisi told those present that the special and historic relationship the two regions shared should in future be as parts of a globalised world and no longer based on the colonial past. It should, he suggested, reflect the values and culture that unifies the two regions.

While acknowledging that the "once intense relationship" and the concept of partnership had been diluted by globalisation and the EU's pursuit of new relationships, he suggested that globalisation not only made going back impossible but also required new thinking.

Second, he suggested that the process of integration in the region had been too slow and weak, and the Caribbean needed to reflect on this. Europe's Director General for Development said that there were positive lessons to be learnt from Europe which had demonstrated the value of advancing integration. He recognised, that while ending preference had been painful and Europe could have been more forward looking, the Caribbean integration process should have been more dynamic.

Third, the EU, in seeking an overarching successor agreement with the African, Caribbean and Pacific Group of countries (the ACP) after 2020 believes this should be based on three separate pillars, one for each of the three regions.

He proposed that a future association agreement with the region might seek to embed within a political framework the governance of the existing trade and development strategy in a manner that requires mutual accountability. He characterised the future relationship as being less about money and more about working together on issues of mutual concern such as climate change, sustainable development, renewable energy, and competitiveness to create a nexus between prosperity, sustainability and people in the context of multilateralism.

Fourth, Mr Manservisi said that other regional realities required recognition. The Caribbean had within it, European overseas territories that have not yet found a place within the region. A way

to integrate them geo-economically was needed.

He also said that in recent discussions with the Cuban government he had suggested Havana had to decide on the type of relationship it wants with Europe. Although an ACP nation it did not belong to the Cotonou Convention. As a country in the process of transforming its economy it should consider what kind of relationship it wants as a part of the region as, he said, might Central America.

"The plurality of region needs to be seen differently, through

a variable geometry," he observed.

He also suggested that there was a need to make the future EU-Caribbean relationship more open so that all stakeholders, including the private sector and civil society, can participate in decision making and in achieving joint agreements through new institutional arrangements.

Such changes, he concluded will require leadership.

His remarks come at a time when there are real differences about the regional integration process, the future of CARICOM and the CSME. They raise difficult but important questions requiring serious debate in private and in public if the EU is not once again by default to set the agenda for the future Caribbean-EU relationship.

When CARICOM Heads meet in Kingston in July there are plans for a 'special session' on the CSME, but it far less clear whether in doing so, Heads will take account of the much-changed external reality Mr Manservisi spoke about.

At the end of his lecture there was only time for one response. This came in the form a diplomatically phrased direct rebuttal from the UWI Vice Chancellor, Sir Hilary Beckles, speaking in a personal capacity.

Sir Hilary provided a Caribbean counter view. Space does not enable me to adequately reflect what he said, but in outline he made clear that the Caribbean and the EU were not equals; the EU had previously not given enough thought to its retreat from the region and had not been sensitive to the consequences; Europe had left the region in dire economic straits from which it had struggled to recover; the EU still had colonies in the region; it was hostile to the financial services the region offered; and a dialogue was required about reparatory justice.

While others in the region hold more nuanced views, Sir Hilary made clear that the EU 27 should not take the nature of a future partnership for granted. His words suggested that Europe had failed to understand the people of the region and where they had come from. While the EU and Caribbean may have shared values, this did not mean that Europe could set aside the rawness of the colonial past.

Mr Manservisi's and Sir Hilary's remarks provide a first indication of the complexity that both the Caribbean and EU27 will face without Britain's modifying influence. One side, Europe, appears to want to forget colonial history while the other, the anglophone Caribbean in particular, is not yet prepared to do so; demonstrating the emotional and intellectual divide that remains to be bridged.