The Samsung S9 has a great camera - just like other phones 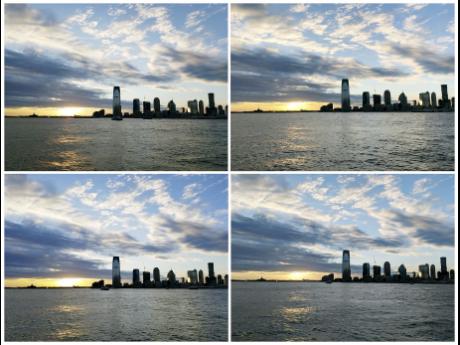 AP
This combo shows photos of a sunset along the Hudson River, taken in New York with a view of New Jersey, on Tuesday, March 6, 2018. Starting at the top left and going clockwise, the phones used are Samsung’s Galaxy S9, Apple’s iPhone X, Google’s Pixel 2 XL and Samsung’s Galaxy Note 8. All top-end phones take decent photos, even in challenging low-light conditions, though there are some color variations.

Samsung says its new Galaxy S9 phone features a "reimagined" camera, and it is indeed pretty darned good. But you might not want to shell out US$720 or more for one just yet unless your current phone is already close to death.

That's because other high-end phone cameras - nowadays, one of the major differentiators between phones - are also pretty darned good. If your phone is recent, it probably already has a decent camera. Technology has improved to the point that it's really hard to tell the difference between them.

In many of our test shots, the S9 outperformed the best of its rivals - Apple's iPhone X, Google's Pixel 2 XL and Samsung's own Galaxy Note 8. Photos had more detail and less distortion. But unless you magnify images for closer inspection, usually there's little obvious difference beyond colour variation, which comes down to personal preference. In a few cases, the S9 performed worse than all three.

The phone comes out March 16 with a US starting price of US$720 through Samsung and T-Mobile and nearly US$800 through other major US carriers. Here's a look at what the S9 offers.

In a first for a major smartphone, the S9 camera has an adjustable aperture, or lens opening, to let in more or less light. Lowlight shots are also improved with software tricks that automatically take 12 shots in quick succession and blend the best of each.

These changes produce small improvements in shots: The evening sky tends to be darker, with less distortion. A statue of Abraham Lincoln doesn't look as grainy. Many S9 shots also have better contrast between dark and light areas.

But these differences are very subtle. What's more likely to affect picture quality is the steadiness of your hands.

The most distinctive feature in Samsung's new camera is super-slow-mo video. People appear frozen as they jump. Waterfalls seem at peace as drops trickle down. The feature offers a fresh perspective on that time-honoured prank of having fake snakes pop out of a can - not so scary when the snakes float in thin air.

It's a gimmick, but loads of fun.

The camera can process only a fifth of a second of video at a time - stretched into six seconds when viewing - so auto detection is key to capturing the right moment. It's fun to see people jump up at this speed, but less so when the super-slow-mo part doesn't kick in until they're almost back on the ground. There's a lot of trial and error involved.

And compared with still images and regular video, super-slow-mo video tends to be darker and blurrier, particularly with close-ups. The feature is at its best outdoors, when lighting is good and the subject in motion is far enough away.

Samsung's Bixby digital assistant taps the camera for instant translations. Just point the phone at a sign and see it in English (or your chosen language) with similar fonts and colours.

Bixby was more reliable at picking up text than a similar Google Lens feature on Pixel phones. But stop signs in Thai, Portuguese and French were translated as 'first', 'shield' and 'crazy'. Bixby got Indonesian right, though. And it can deal with long passages in posters and documents.

Point the camera at food for nutritional information. It gave me close-enough calorie counts for a burger and onion rings, but a roast beef sandwich was misidentified as either a pastrami or a cubano sandwich, depending on the angle.

All counts are based on single servings.

The larger S9 Plus model has a second lens with twice the magnification.

Both S9 models have a feature for turning selfies into personal emojis for sharing in messages.

The new phone is easier to unlock by looking at it. Past Samsung phones scan your iris, but they don't work reliably in bright sunlight. The S9 supplements that with facial recognition, which isn't as secure. For that reason, Samsung won't let banking and other sensitive apps use just the face, but it's okay for unlocking the phone - you can disable it if you're concerned.

In any case, glasses can still be challenging, but there's a fingerprint sensor on the back as a backup. It's moved slightly to reduce smudges on the camera lens.

Beyond that, the phone's design hasn't changed much from last year's S8. But that's okay. No need to fix what isn't broken. What matters is what the phone does - and shoots.