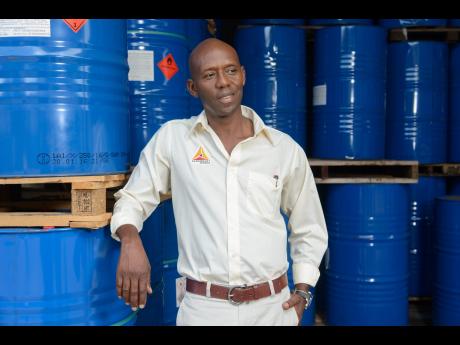 Sales at lubricants company Paramount Trading Jamaica Limited spiked above a billion dollars over nine months ending February, but its expenses grew at a faster clip due to the acquisition of a new business, as well as its transition to a manufacturing outfit.

Paramount CEO Hugh Graham is now looking to the new bleach business purchased from Seprod as an opportunity for growth - with an eye on the consumer market - even as the company wraps up minor works on its lubricants-blending plant which became operational in January.

Paramount reported a 17 per cent increase in third-quarter sales to $329 million but a dramatic fall in profit by 70 per cent to less than $9 million. For the nine-month period, sales were up 24 per cent to $1.03 billion, while profit fell 18 per cent to $66 million.

The bleach plant is not yet operational, but Graham expects it to be ready for business before the company wraps up its financial year in May.

"We're looking with relish at the prospects for the bleach market because in terms of the consumer lines, there isn't that much by way of local production," said the CEO.

"We may only have three, including Paramount. The rest come from outside, in particular, Trinidad," he said.

"In effect, all the brands that Seprod used to produce, we will be doing, plus those other brands which would not have gone to Seprod for competitive reasons. We see prospects in both satisfying market demand and reaching new markets," he added.

Paramount bought all equip-ment, rights, and contracts when manufacturing conglomerate Seprod exited the bleach business in November 2017. The acquisition included production contracts for about five bleach brands, but Graham is not naming them, saying the information would first have to be cleared by the owners.

The bleach deal was struck as Paramount was finalising the main elements of its lubricants blending plant, a business owned 50:50 with joint-venture partner Allegheny of the United States. Graham previously indicated that up to March, the lubes plant was 90 per cent complete.

He also told the Financial Gleaner on Monday the bleach plant was still being ramped up and that both manufacturing projects are being financed from internal resources.

"We're in the middle of two massive expansions in the bleach plant and the lubricants plant and we have not borrowed any money. While those costs would have hit the profit line we are preparing for the time when those plans are fully on stream," he said.

"We've onboarded some strong people, so our admin costs would reflect that," Graham said.

Paramount is negotiating a new marketing partnership, but Graham declined to identify the company before the deal is done, citing confidentiality agreements.

The lubricants plant will produce Allegheny's Altra products, but Graham now says the company will also be blending lubricants for other marketing companies.