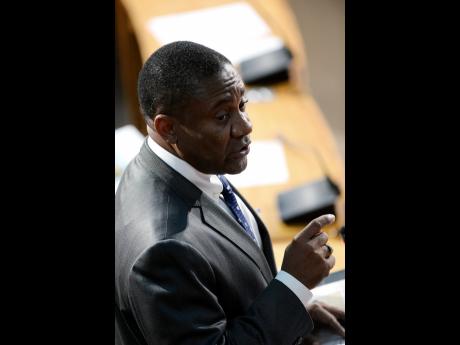 Cloaking itself within the law, the Ministry of Finance dodged questions regarding a controversial tax that was introduced to pay for oil hedging contracts for Jamaica three years ago, at a time when crude prices were expected to start climbing again.

That turned out to be a misread of the oil market not only by the Government, but analysts worldwide, and Jamaica's hedging contracts were never renewed after the initial transaction.

However, there is nothing to indicate that the Jamaican Government has rolled back the tax that was expected to take in $6.4 billion initially to pay for the hedges, by levying a 6 US cents or $7 per litre charge on petrol sales.

This week in Parliament, Opposition Spokesperson on Energy Phillip Paulwell charged that the tax had been diverted for other purposes.

"While we agree that we have little control over the international price of fuel, a lot of the price increase is due mostly to the onerous taxes imposed ... . Today, without factoring recent increases in the price of fuel on the global market, the average cost of electricity has been increased by 30 per cent to 27.5 US cents per kilowatt-hour," he said in his contribution to the Dectoral Debate on Tuesday.

"The oil hedge fund, which was introduced as an insurance against the fluctuation of oil prices and to ensure the country's energy security, is being used as support for the Budget. The funds from that programme are now estimated at some $6.4 billion annually. We believe that there is no justification for the tax to continue. "

Since March, the Financial Gleaner has been attempting to get answers from the finance ministry on the amount of special consumption taxes collected yearly since 2015 to pay for the hedges.

Having received the queries, the ministry chose to treat it as an Access to Information request; then, itself having invoked the law, proceeded to accuse the Financial Gleaner of misusing it.

"Please note that the intent of the ATI Act is not intended to answer questions posed at will, but that any response should, 'apply to official documents held in registry or other office of the court, being documents that relate only to matters of an administrative nature' ... Questions I and 4 [asking how much has been collected and if hedging would be resumed] are asking for an opinion for which no official documents exist," said the ministry.

The Financial Gleaner did not invoke the ATI law in its request for comment, and pointed this out to the ministry. Another request for the information on the taxes collected was ignored.

In June 2015, the Government of Jamaica bought several oil contracts through counterparty Citibank NA. The contracts spanned a 15-month period to September 2016, and each had a different strike price. However, the average strike price was about US$66.74 per barrel.

When Jamaica executed that deal, there were expectations that world oil prices could rise to US$70-US$80 per barrel by the end of 2015, coming from around US$40 per barrel. However, prices stayed below US$50 for a period.

Paulwell 's request for the rollback of the tax comes as oil prices are back on the rise - crude oil contracts are now trading at around US$68 per barrel.

Asked about his timing, Paulwell said on Wednesday there is no indication that the Government is interested in getting back into hedging its oil bill.

"It's a part of the Consolidated Fund, and it's really accepting money under false pretences," he asserted.

Although the Bank of Jamaica, which was overseeing the hedging programme, had been exploring the purchase of new oil contracts in late 2016, nothing came of those plans.

"The Government of Jamaica does not currently have oil hedge agreements in place," said Audrey McKenzie on behalf of the financial secretary of the finance ministry back in March.