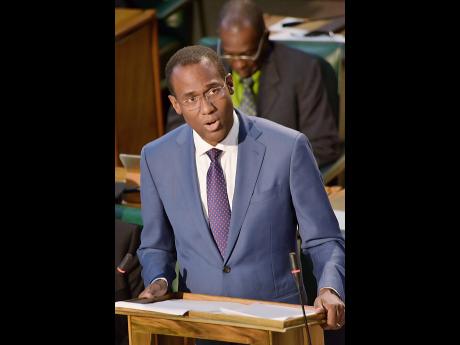 The Holness administration has approved the proposed legislation of a fiscal council to replace the Economic Programme Oversight Committee, EPOC, when the current agreement with the International Monetary Fund, IMF, comes to an end in 2019.

Minister of Finance and the Public Service Dr Nigel Clarke said the expressed intent of both the IMF and the Jamaican Government, on the dawn of the precautionary standby agreement, was for Jamaica to be in a position to graduate from a programme relationship with the multinational financial institution at its maturity, barring any unforeseen circumstances.

"Given the success of the five-year engagement with the fund and likely prospect of Jamaica graduating from a relationship with the fund, it's important to consider the institutional arrangement that may assist Jamaica in keeping on a track towards economic independence," the minister said.

Some persons have suggested legislating EPOC, he said, referring to Opposition Leader Peter Phillips, among others.

"I don't take such suggestions literally, nor do I understand the suggestion to have been meant literally. EPOC as an entity has no analytical capacity of its own. It consists of full-time, hard-working, capable leaders and was essentially created to monitor agreements between the IMF and the Government of Jamaica," Clarke said.

The committee has dual chairmanship: the governor of the Bank of Jamaica, Brian Wynter; and a private-sector represen-tative, currently Keith Duncan of JMMB Group, who replaced Richard Byles of Sagicor Group at the end of 2016.

"Without a fund agreement and without the fund's analytical capacity and detailed written and published reviews, EPOC as constructed would not necessarily work," Clarke told a forum organised to outline the next step in enhancing fiscal responsibility on Thursday.

"What I believe could work, however, is legislating for the institutional permanence of the principles on which EPOC and its companion entities have been founded," the finance minister said.

Clarke said those principles are enhancement of accountability

The establishment of an institution that embodies those principles is crucial to the achievement and maintenance of Jamaica's economic independence, he said.

As a result, having been appointed to his current position at the end of March, he made a submission, which Cabinet approved in April, for the establishment of an independent fiscal institution and the Government has since procured the services of an experienced international expert in that area to help in its design.

The minister explained that fiscal councils are permanent, independent, non-partisan institutions staffed by competent, experienced and technical persons who help to promote economically sustainable fiscal policies across political cycles and are created by legislation.

He said that since the advent of the global financial and economic crisis in 2008-09, fiscal councils and independent fiscal institutions have proliferated as countries seek to implement measures to restore fiscal credibility.

They also deepen democratic accountability, as policymakers have to maintain credible policies or explain what might appear to be deviations.

However, he pointed out that fiscal councils are not policy or decision-makers and only offer a second opinion. "They are not gods or czars. Neither are they a parallel opposition or a parallel government," he said.

Rather, they influence the public debate indirectly through the media impact of their reports.

A most important feature of fiscal councils lies in their independence from partisan influence, and access to the media in designing their communication strategy, with the proviso that it be done on a schedule to avoid the perception of communicating for partisan effect, the minister said.

There are various responsibilities that the proposed fiscal council can take on, but "what we decide to do has to be moderated by the resource envelope that we have," Dr Clarke said.

However, a principal objective of such a fiscal institution in Jamaica would be the guardian interpreter and arbiter of the fiscal rules, said the minister, referring to the fiscal responsibility framework Jamaica adopted with the passage of legislation in 2010 and strengthened in 2014 in the pursuit of an agreement with the IMF.

A Jamaican fiscal council could monitor Jamaica's compliance with the rules and keep the public informed on economic matters according to a scheduled timetable.

"This should help Jamaica maintain a path of fiscal prudence, enhancing our economic independence," Clarke said.