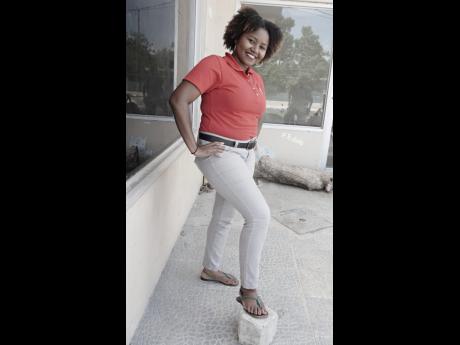 Shanalee Cawley rests one of her feet on a block made from ECO-Aggregate.

A coalition of business students have devised a new method of producing building material that will help to resolve the pile up of plastic bottles in Jamaica, at least to the degree that they are able to commercialise and market the product.

Through a venture called Eco-Structures, the trio of civil engineer and part-time student Kristoffer Henry, business and law student Shanalee Cawley, and chemist and part-time student Tricia Bent have developed a way to repurpose plastic waste, specifically polyethylene terephthalate, or PET, by integrating it with materials, such as cement and stones, to make aggregates for use in developing building blocks.

PET is the same plastic used to make bottles for the drinks industry.

Eco-Structures, which calls its product ECO-Aggregate, says the idea came from brainstorming over business ventures to fulfil course requirements for their entrepreneurship class at the Mona School of Business & Management at the University of the West Indies (UWI), Mona, in mid-2017.

"We were looking at general environmental issues and we were trying to determine how we could be part of a solution to resolve an issue that Jamaica is facing," said Cawley.

Led by Henry, the civil engineer, the group started experimenting with different mixtures and particle sizes.

"The blocks in the first instance surpassed the Bureau of Standards test requirements by quite a bit, even when we tested them after seven days instead of the standard 28 days," she added.

Further validation came through consultation with Dr Marhoun Ferhat of the Material Sciences Department at the UWI, Mona.

Cawley says Ferhat has been assisting the group and has given the mixture his stamp of approval. Eco-Structures also made connections with the professional engineers association in Trinidad & Tobago, which says it has been doing similar experiments, and "they want to work with us to move it further", she said.

Eco-Structures is now focused on preparing the product for market, and is working on the procurement of equipment.

"Regarding scaling up, the possibilities are endless. Once we get our hands on the equipment we need then, as they say, we are good to go," Cawley said.

The blocks made from the ECO-Aggregate formulation are 20-25 per cent lighter than regular building blocks, said Cawley.

"If we were to go into block-making, as we originally planned, each block would cost about $55-$60 as against regular blocks that cost anywhere between $80-$85 so our blocks are way below the current market cost, and deliberately so," she told the Financial Gleaner.

Eco-Structures is also contemplating franchising the technology for block-making, while concentrating more on producing aggregates.

The group is in discussions with an angel investor to finance a full start-up of the business. Eco-Structures is also working with three Jamaican companies that Cawley declined to name at this time, but indicated that they generate a lot of PET waste.

"The nature of the arrangement is that what we're doing is in keeping with what those companies are trying to resolve from their end, so our input is important to them because of the basis of their business. And, for one of them in particular, it would help to resolve issues they are having," Cawley said of the potential partnerships.