Jamaica at No 1 for cargo movements, but Dom Rep closing in 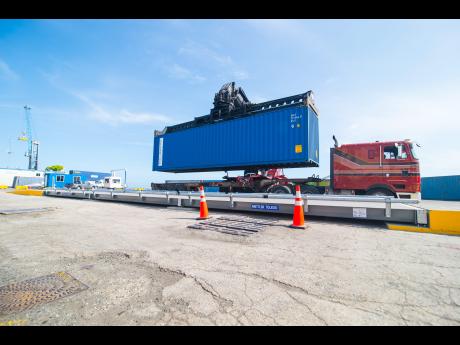 File
In this 2016 photo, a container is placed on the new weighbridge at the port terminal operated by Kingston Wharves Limited.

Cargo ports in Kingston ranked first in the Caribbean and eighth in Latin America for cargo movements in 2017 despite flat performance, according to data released by a United Nations regional body.

The port in Caucedo, Dominican Republic, ranked second in the Caribbean, having grown its cargo movement by one-third last year to shorten the gap between itself and Jamaica.

"I do not think we have anything to worry about," said chairman of port company Kingston Wharves Limited, Jeffrey Hall, when asked about the growth in the Dominican Republic.

The larger the port, the more opportunities to expand with existing shipping lines and new business, Hall reasoned. He said both Kingston Wharves and the larger Kingston Container Terminal operated by Kingston Freeport Terminal Limited are making multimillion-dollar investments to upgrade infrastructure to accommodate additional cargo, while Kingston Wharves is also diversifying its business lines to include logistics and other services.

Kingston Wharves is a subsi-diary of the Jamaica Producers Group. Kingston Freeport Terminal is operated by the CMA CGM shipping group of France.

"We are investing, the sector is growing, the country is growing, so the sector can't sink," Hall said, while predicting a rise in cargo movements this year.

"We are bullish about the industry and we think that Kingston will maintain its number one position in the Caribbean," Hall added.

The ranking for Jamaica remained level at eighth for at least three consecutive years, according to the Economic Commission for Latin America and the Caribbean (ECLAC), which is one of the five regional UN commissions. The decline in Jamaica occurred within the context of a 6.1 per cent increase in the cargo movements in Latin America and the Caribbean, according to ECLAC's Maritime and Logistics Profile.

"In the Caribbean, the rise in container traffic was notable in the ports of the Dominican Republic, Grenada and, to a lesser extent, Antigua & Barbuda, and Martinique, while on the north coast of South America, the most marked increases were seen in Colombia and Suriname," the report noted.

The countries whose container port terminals contributed the most to the change in cargo volume versus the previous year are from greatest to smallest, Dominican Republic, Colombia, Mexico, Panama and Brazil.

The total volume of activity in 2017 reached approximately 50.6 million TEUs. The first 40 ports in the ranking represent a little more than 87 per cent or 44 million TEUs of this type of cargo operation in the region.

Cargo movements among the largest 100 ports in the globe at 600 million TEUs are up 6.1 per cent year on year, in line with regional growth, according to ECLAC.

The top ports in Latin America and the Caribbean: