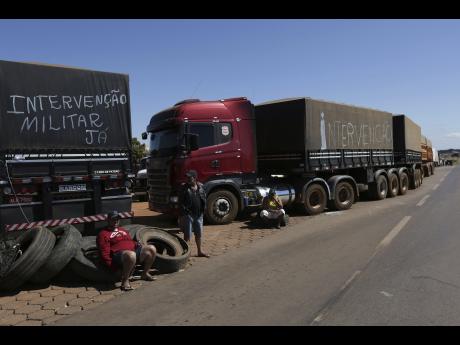 AP
Trucks sit idle during a truckers strike in Brasilia, Brazil, Saturday, May 26, 2018. Thousands of Brazilian truckers angry over fuel price hikes blocked roads during a strike that led thousands of schools to shutter, long lines to form at gas stations and several flights to be canceled.(AP)

Only a year ago, financial newspapers were running stories about the demise of truck drivers.

Technological advances in artificial intelligence, or AI, were leading to driverless cars, and pundits were warning that the changes would soon move into freight transportation. There were news stories that driverless trucks were already being tested in rural areas of Nevada.

However, for an industry that is in the process of obsolesce, times could never be better for truck drivers. In a period when wages are stagnating across the United States, truckers saw an increase of 15 per cent last year. Some truckers are making upwards of US$120,000 per year, and the industry average is US$86,000. Young recruits are being offered US$5,000 signing bonuses and promises of generous health benefits and pension plans.

Three major forces are shaping the industry. The first is demographic. The baby boom, which began 65 years ago, is moving into retirement, and millennials are not showing much interest in getting behind the steering wheel of an 18-wheeler. Long hours, monotonous conditions and extended time away from home are not very appealing to the instant-gratification Xbox generation.

The second force shaping the industry is Amazon. The meteoric rise of online retailing has led to a similar jump in the demand for trucks. Approximately 73 per cent of the goods sold in the US are shipped through the trucking transportation system.

The third factor is the fracking. Hydraulic fracking requires massive amounts of water and sand that needs to be moved in and out of drill sites, as well as the hydrocarbon liquids that need to be processed once they are extracted.

All of these factors are further complicated by the decline in immigration, which typically provides an ample supply of low-skilled and low-paid workers. Trucking costs are soaring, up six per cent last year.

Initially, many companies were absorbing the costs. Last quarter, General Mills reported a decline in profits due to higher transportation costs. Nevertheless, the increases will soon make their way to the final consumer and this will take the form of higher inflation.

The problems in the trucking industry are not relegated to the United States.

Brazil just provided proof of the importance of the sector. A week-long truckers' strike brought the country to its knees. Highways were clogged as drivers blocked major thoroughfares. Cities saw food and fuel shortages. The strike shaved about three-quarters of a point off this year's GDP growth. As a result, the Brazilian economy will probably grow only 1.4 per cent y/y.

The strike also had a major political impact. Not only did President Temer have to give in to the truckers' demands, Pedro Parente, the highly effective CEO of Petrobras, was forced to step down. Moreover, it pushed the electorate towards the political right. There were calls for military intervention, and the popularity of right-wing candidate, Jair Bolsonaro, saw a boost.

The success of the Brazilian strike was not lost on its southern neighbour. The Argentine truckers union, the CGT, led by its militant and pugnacious leader, Hugo Moyano, announced a similar work stoppage on June 14.

Such an event will be very disruptive to the Argentine economy, which is already suffering from a steep fiscal adjustment. GDP growth for this year has been revised down to 1.3 per cent y/y. A major strike will also send consumer prices higher. Inflation, which was initially expected to end the year close to 15 per cent, will most likely be twice as high.

A truckers' strike would most likely send the number over the 30 per cent mark. It will also heighten the political tension in Argentina.

The CGT is an integral part of the Peronist Party, and the strike will help bolster the political opposition against President Macri.

Truckers are having a very important impact across the developed and developing world. It was only a matter of time until the major demographic changes that have been affecting most of the developed world would translate into higher inflation. It seems that the principal conduit has become transportation.

Even though commentators were heralding the demise of the truck driver, the opposite happened. Two economic innovations, online retailing and fracking, unexpectedly raised the demand for truck drivers, and this manifested itself into higher shipping costs.

In the developing world, the band-aid solution to the financial woes facing state-owned oil companies in the aftermath of the 2014 collapse in global oil prices was to pass the cost of the adjustment on to the local consumer. This was seen in Argentina - YPF; Brazil - Petrobras; and Mexico - Pemex.

As a result, most of these countries saw gasolene and diesel prices that were higher than in the US and most other developed countries. Yet, Brazilian truckers were the first to revolt, and the Argentines will soon follow - which will lead to new political and fiscal problems.

Beware the truckers, because they have become a virulent global economic force.