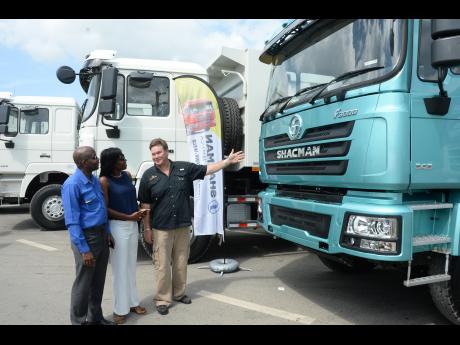 Tank Weld Equipment expected to sell 25 Shacman trucks this year, and placed that order with the Chinese manufacturer.

But the units have already sold off, according to Managing Director John Ralston, who said at the launch of the new truck dealership this week that he has put in an order for more trucks.

"Six months into the year we are four times ahead of our dealer target for the year 2018 and every day our numbers are climbing. The customer feedback has been very encouraging," Ralston said at the launch event.

"We ordered 25 trucks and thought that would be enough to keep us for the rest of the year or at least for a good length of time before the next order. Those were sold out before they arrived and we have another 15 on order that are being prepared for shipment," he later told the Financial Gleaner.

The truck dealership became operational in January. Tank Weld is the dealer for the Shacman in Jamaica, and is also the master dealer for the Caribbean.

Shacman meanwhile has set up its regional headquarters in Jamaica, close to Tank Weld's complex at Six Miles in Kingston. The office staffed by five Chinese nationals living in Jamaica two administrative, two technical and one after-sales person, according to Ralston.

Tank Weld repurpose a five-acre facility which formally housed the offices and repair yard of Tank Weld Equipment Limited, a subsidiary of the Tank Weld Group, to house the truck dealership.

"We've spent about US$1.5 million already and that's just on the facility. In terms of stock that is an ongoing matter and we've been moving along with the orders,' Ralston said.

The new facility houses showrooms and a 12-bay service station, as well as a spare-part and merchandising unit.