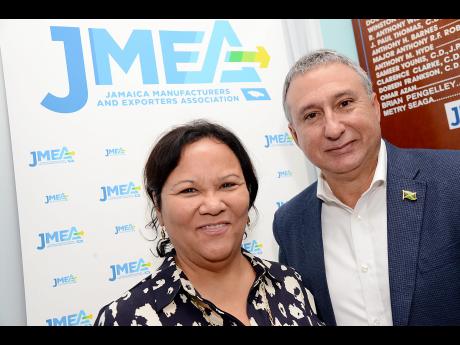 The Jamaica Manufacturers and Exporters Association is renting out the building that previously served as the headquarters for exporters, but its president is also mulling future plans to utilise it as a training hub.

It also emerged this week that Michelle Chong and Metry Seaga would hold directorships in JMEA for life.

The building at Winchester Road was acquired by the exporters in 2005, but the activities and staff were transferred to Duke Street, after the merger of the Jamaica Exporters Association with the Jamaica Manufacturers Association to create the JMEA in April of this year.

"We are renting it out to earn income for the association. We will keep it as an asset for the future," said Metry Seaga, who was elected as the first JMEA president two weeks ago on June 29.

"For my own part, I am looking at a big plan -- it can be used as a training centre and things of that nature," he said.

On Monday, a single tenant, the University Council of Jamaica, was making final preparations to move into the 6,000 square foot building.

"As at right now the board has decided that it is an asset worth keeping and income worth having on a monthly basis. Personally I would not like to see us sell it now," Seaga said.

The building is capable of housing several tenants, the JMEA Secretariat advised, but said that for the time being only one tenant will occupy the space. The projected rental income was not disclosed.

Both the Winchester property, located uptown, and the Duke Street building downtown are the two largest assets held by the JMEA. Their values were also not disclosed.

The Duke Street property, which was the home of the manufacturers, is close to three times larger than Winchester, at 17,000 square feet. Its choice as the secretariat for the merged association was based on a 'least-cost' decision, and the group's support of the redevelopment initiative for downtown Kingston, said Executive Director Imega Breese-McNab.

The JMEA operates from the upper floor, while the ground floor is occupied by the Office of the Political Ombudsman.

The newly elected JMEA board will have its first meeting next Tuesday, July 17, which Seaga said would deal largely with housekeeping matters.

"We will also be using the opportunity to set the vision going forward and putting the various committees together -- getting the right people into the right positions," he said.

The JMEA president once again gave an assurance regarding continuity of programmes, amid a change in the composition of the body.

"We did our own at the JMA and we intend to incorporate what the JEA has done. The hand-holding is a critical component especially for the smaller exporters and manufacturers," said Seaga.

"The only difference now is that we have members who are not manufacturers that are service providers or straight agriculture persons, but we do have expertise on the board that will guide us in that direction," he said.

The officeholders of the presidency of the associations that merged will also hold directorships for life, according to Andrea Johnson, executive assistant to the JMEA president.

This means Michelle Chong, who was the JEA president, is a member of the JMEA board. Chong had vied unsuccessfully for the deputy president's slot at the June meeting.