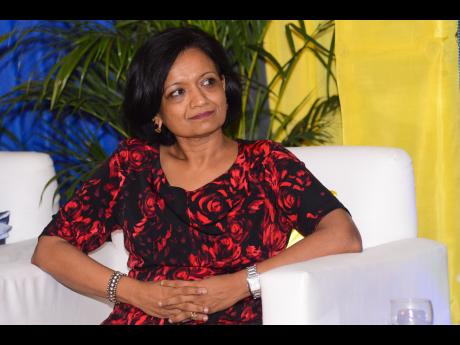 Shorn Hector
In this June 14, 2018 Gleaner photo, IMF Mission Chief to Jamaica, Dr Uma Ramakrishnan, participates in a public forum at the UWI Mona Visitors Lodge in Kingston. Dr Ramakrishnan said in a podcast on Wednesday, September 12, that the depreciation of the Jamaican currency is due to low inflation.

International Monetary Fund mission chief to Jamaica, Dr Uma Ramakrishnan, defended the depreciation of the Jamaican dollar this week, saying inflation rather than the sliding dollar was the country's main economic concern.

"The problem in Jamaica is that the inflation rate is a little too low relative to the inflation target," said Ramakrishnan in an International Monetary Fund podcast released on Wednesday, September 12.

Ramakrishnan attempted to allay public concerns about the Jamaican currency, saying "runaway" depreciation and its negative pass through effect on prices are a thing of the past.

The drivers of price, she said, included the cost of raw materials, labour, capital and foreign exchange rates.

"So exchange rate movement doesn't immediately result in the movement of prices, because there are other components that are the drivers of price. Therefore, what's important to consider is the pass-through of the foreign exchange rate to inflation. And in Jamaica, the pass-through has gotten less over time, and that is a good thing," said the IMF mission chief.

The performance of the currency has brought renewed attention to the Bank of Jamaica's, BOJ, intervention policy. The central bank operates the BOJ Foreign Exchange Intervention & Trading Tool, branded as B-FXITT, which signals four weeks in advance the amount of funds it will buy or sell to authorised dealers. The BOJ generally does not adjust its targets over the period, which provides predictability for the market.

"Policymaking cannot respond to everyday events, as it will generate volatility rather than prevent volatility," said Ramakrishnan, while rejecting the suggestion that the operations of B-FXITT should be adjusted to constrain the pace of depreciation.

What drove the depreciation, she noted, was the strengthening of the US dollar in response to higher interest rates in that market, which resulted in depreciation of most emerging economies, and not only Jamaica; portfolio investors have switched to holding more foreign currency and less local currency; and the recent bond redemption equivalent to US$58 million provided added liquidity in the market, eventually resulting in an oversupply of Jamaican dollars.

Jamaica's economic reform plan, launched back in 2013, has shown promise, according to the IMF. Employment is growing, inflation is in the low single-digit levels, external borrowing costs are the lowest since Independence for the Jamaica Government, and consumers are benefiting from reduced interest rates. Economic growth, however, still remains slow, and the recent depreciation of the Jamaican dollar has turned attention to a shift in the BOJ's foreign exchange policy.

"The idea is that price stability is the goal and it is to be delivered consistently in the medium-term context and that is where the BOJ is right now, and the flexible exchange rate is supporting the environment. It absorbs the shocks that may arise," the IMF rep said.