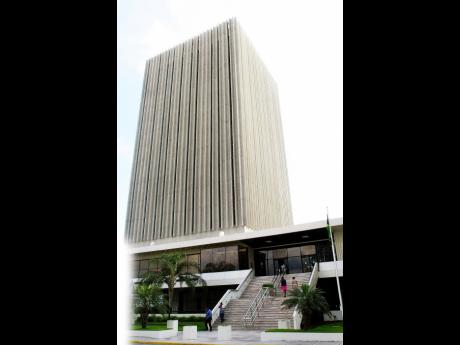 The Bank of Jamaica.

Perceptions about present and future business conditions worsened during the last quarter as the proportion of persons who are less optimistic about the effect of the economy on individual businesses increases.

In the May 2018 survey conducted on behalf of the Bank of Jamaica, BOJ, businesses were less optimistic about present business conditions as the proportion of respondents of the view that conditions are "worse" increased.

In addition, there was a decline in the proportion of respondents who believe conditions are "better", according to data the central bank released recently as part of its quarterly monetary policy report for the period April to June 2018.

Relative to April, businesses were also less optimistic about the future as the proportion of respondents who believe that conditions will be "better" declined.

The BOJ noted that, as was the case in the previous survey on the perception of present and future business expectations, respondents indicated that they expect the largest increase in production costs over the next 12 months to emanate from the cost of utilities.

That was followed by costs for fuel and transport as well as stock replacement, while they expect the least from costs for wages and salaries.

Approximately 46 per cent of the respondents anticipated an increase in wages, similar to that in the April 2018 survey. The expected average increase in wages fell to 6.6 per cent, relative to the 7.9 per cent in the previous survey.

The survey at May 2018 indicated that one year ahead, businesses' inflation expectation was marginally below the midpoint of the bank's inflation target of 5.0 per cent.

Respondents' expectation of inflation 12 months ahead declined to 4.9 per cent, relative to 5.3 per cent in the April 2018 survey. Furthermore, businesses expected an inflation rate for calendar year 2018 of 4.7 per cent, which is slightly lower than the 2017 calendar year out-turn of 5.2 per cent.

Relative to the April 2018 survey, respondents expected the exchange rate to depreciate over the next three-month, six-month and 12-month horizons at faster paces, relative to expectations in the previous survey.

The majority of respondents expected the bank's open market operations or OMO rate, three months ahead, to remain unchanged.

However, the proportion of respondents of that view fell relative to the previous survey, while there was a noticeable increase in the proportion who believes it would be "marginally higher". The 90-day Treasury bill yield, three months ahead, was expected to decrease to 2.7 per cent from the expected 4.5 per cent recorded in the April 2018 survey.

The open market operations involve money market trading between the BOJ and authorised dealers with the intention of influencing money and credit in the financial system. OMO involves outright sale or purchase of Government of Jamaica securities from the stock of securities held by the central bank and/or repurchase and reverse-repurchase transactions.