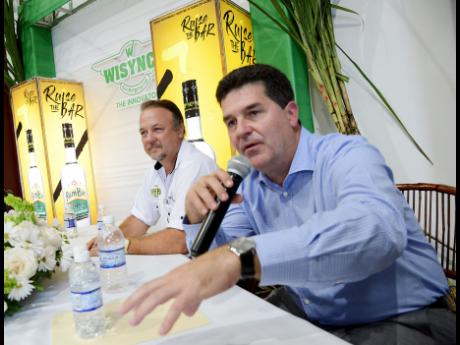 Wisynco Caribbean, the parent company for Wisynco Group Limited, has taken a 30 per cent stake in Worthy Park Estates, a sugar operation owned by the Clarke and McConnell families.

The deal comes with a large distribution contract for Wisynco Group over five years, which will add sugar and spirits to its distribution portfolio - two product lines that are expected to grow sales by around $2 billion, according to Wisynco Chairman William Mahfood.

"The fact that the local entity will have all of the distribution of the sugar and the rum and spirits on the local market means that we'll get the benefits of the distribution, the revenue and the margin without the risk of the investment," Mahfood told the Financial Gleaner after the announcement of the deal.

The risks he said would rest with Wisynco Caribbean, a private holding company owned by the Mahfoods, for which William is also chairman.

The value of the transaction with Worthy Park was not disclosed, but Mahfood said it was a substantial investment.

"The reason why we did it through the parent company is due to the inherent risk associated with sugar. The likes of Seprod and others have struggled with consolidating the profits or losses from the sugar operation," he said.

Worthy Park produces raw rum, but also sells its own branded rum under the Rum Bar label. That product was being distributed "in a limited way" by Select Brands, with Worthy Park taking up the rest of the slack. The changeover to Wisynco as distributor takes effect on November 1, 2018.

In addition to the Rum Bar line - Silver, Gold, Rum Cream and Rum, other spirits covered by the deal include, Worthy Park Single Estate Reserve, and the vodka line - Vodka Classic and Vodka Green Apple.

Amid reform of its distribution arrangement, Worthy Park Estate is hunting a permit as a 'marketing agent' from regulator, the Sugar Industry Authority, SIA, which confirmed Tuesday that the discussions were under way.

Mahfood says Worthy Park has written to JCPS, which currently distributes its sugar, saying their arrangement would conclude at the end of the 2018 crop. The estate will begin selling sugar under the Worthy Park brand, which was launched in January of this year.

"Now we will do all of the distribution, so whereas in the past Jamaica Cane Products and SIA would take their cut off the top of all sugar produced in Jamaica, because of the competitive environment for sugar, they [Worthy Park] can't afford that," said Mahfood.

"Your route to market should only contemplate manufacturing and distribution costs or else it won't be sustainable," he said.

The Wisynco investment and distribution deal has resulted in expansion on both sides. Worthy Park Estates now boasts a new 10,000 square foot bagging facility that will take care of bulk sugar while the bagging for small packages for the retail market will be contracted out to a company that Mahfood said can't be named right now, due to ongoing negotiations. The arrangement is expected to be concluded by the January 1 start of the next sugar crop, he said.

Wisynco will be renting an additional 50, 000 square feet of warehouse space, along with more trucks and service vehicles, to facilitate the distribution arrangement, he said. It adds to company's expansive distribution centre that has 360,000 square feet of dry goods warehouse space, and operates 300 contracted and 60 company-owned trucks, backed by a sales force of over 700.