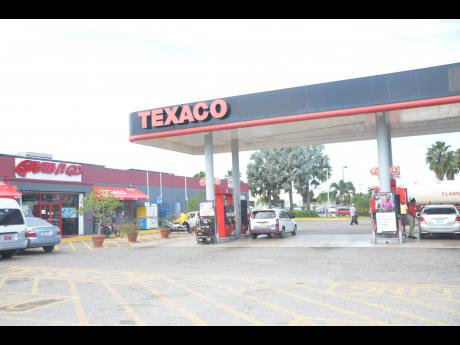 GB Energy Jamaica, which has been experimenting with liquid petroleum gas, or LPG, as a fuel source for autos, is now preparing for a full roll-out that is expected to span the Texaco network, in phases, in partnership with Jamaican start-up Tecnigas.

It requires the conversion of vehicles to accept LPG, at the heart which is a choice of two styles of containers with variations in sizes between them. One container comes in the shape of the typical spare tyre and fits in the spare tyre space; the other looks like a small cooking gas cylinder fitting discreetly right behind the passenger seat in the trunk of the car.

Tecnigas specialises in LPG vehicle conversion as well as the distribution of LPG parts for industrial and commercial use. Under the alliance with GB Energy, Tecnigas will convert the vehicles to accept LPG. The fuel will initially be available at seven Texaco stations across Jamaica, beginning with the location at 23 Half-Way Tree Road. The plan is to gradually install equipment to dispense the fuel at most of the 70 Texaco locations.

"One reason why it has not happened in Jamaica over the years is that there has not been that sort of partnership. There must be good supply, and that means stations around Jamaica and somebody would need to invest in that as well as a partner that can invest in both the installation and post-installation service," said CEO of Tecnigas, Alex Hill, explaining the timing of the launch.

Hill says his company will be setting up full-service LPG conversion centres, the first of which is at 63 Hagley Park Road at the old Mitchell's Auto complex. He said that based on assessments, the partners estimate that about 96 per cent of Jamaican vehicles that run on petrol can do this conversion.

For the typical sedan, say a Corolla, which carries a four-cylinder engine rated at around 100-130HP, complete installation runs at just under $200,000.

Country Manager for Texaco Mauricio Pulido says his company will be selling LPG at between 40-50 per cent cheaper than 90-Octane fuel. On that basis, the payback on the installation of the LPG tanks for motorists would be 15-17 months. Installation for larger vehicles typically runs at just over $245,000, Hill says.

He adds that the savings would extend beyond pump prices, as the installation of the additional fuel source means that the vehicle can go much further between fill-ups.

"This will make it a true dual-fuel vehicle that has an extended range, because there is one fuel source that burns cleaner and cheaper. It is a seamless switchover to the other fuel source," Hill said.

The Financial Gleaner pressed Hill on whether the installation of the LPG system would void the warranty on a new vehicle, to which he responded that the issue would have to be resolved with Jamaican dealers.

"That's a question we'd have to put to the dealer. What I can say is that in other countries, dealers have felt comfortable enough to accept the introduction of an LPG conversion kit and still keep the warranty," he said.

Tecnigas uses Tartarini Auto Industries kits for the conversions. Tartarini Auto is an Italian company that created the first LPG vehicle-conversion kit and successfully deployed it in a Fiat 508 in 1941, according to Hill. He says that since then, they have been continually innovating and improving their LPG auto-conversion technology with millions of vehicles converted around the world.