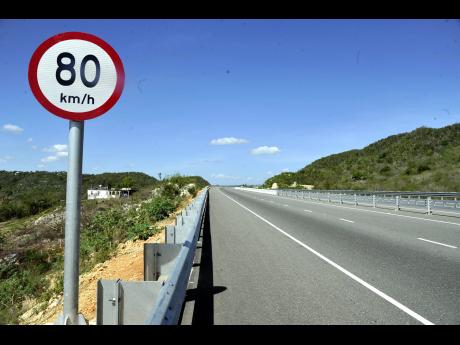 Norman Grindley
A speed limit sign is displayed on the North-South Highway.

Michael Nicholson is a lecturer in business administration. He works at the University of Technology Jamaica.

He penned an article in last Thursday's Jamaica Observer: 'When the traffic law is a member of the horse family'. Wasn't he aware that the 80-year law to which he referred was being replaced? Why was the headline so wordy? Wouldn't the use of the phrase - 'an ass' - be adequate? Did it not express the same idea with more clarity and fewer words? Horses and asses (donkeys) are members of the same scientific family - Equidae. The headline writer cannot be criticised. He correctly linked the four-legged animal to which Mr Bumble famously referred in Charles Dickens' Oliver Twist - "the law is a ..." - to a horse.

Among the many points argued by Mr Nicholson in his article, six stood out. They are summarised as follows:

- He 'has tried for years to arouse the Ministry of Transport to review some speed limits and the use of unbroken white lines';

- Problems that motorists must confront with some speed limits and unbroken white lines 'which are more like snares ... than to provide guidance' are 'bizarre';

- The 80-kilometre per hour speed limit on the Edward Seaga Highway are 'laughable and does not make sense.' What road safety concerns are there at work?;

- The last time he drove on that highway 'he used cruise control to maintain the exact 60 and 80kph limits and every single vehicle overtook his car. He no longer uses this road as he finds the limits impossible to obey and is not prepared to pay the toll for risking large fines for speeding';

- The rate of accidents on German roads, those with and without speed limits, were the same; and

- The authorities waste a lot of money painting unbroken white lines on the roads. They are not used to 'delineate lanes and warn of things like dangerous corners or other conditions'.

Jamaica is a democracy. Persons have the right to hold and express their opinions. Teachers and other persons of influence - especially those who are affiliated with institutions of higher education - have a special duty to ensure that when they use print or other media to express their thoughts, those opinions are informed more by facts and less by emotions. Teachers must be able to think analytically. Critical thinking is 'a widely accepted educational goal'. Mr Nicholson's article did not meet these criteria.

He selectively used data published by the World Health Organization (WHO) to support his argument for higher speed limits but omitted to mention that in 2013 "low- and middle-income countries had higher road traffic fatality rates per 100,000 population (24.1 and 18.4, respectively) compared to high-income countries (9.2) and that the African region had the highest road traffic fatality rate, at 26.6, while the European region had the lowest rate, at 9.3".

Mr Nicholson also appears to have completely overlooked WHO's 2004 World Report on road traffic injury prevention - http://www.who.int/violence_injury_prevention. Below are highlights from what the organisation describes in a two-page pamphlet as facts about road safety and speed:

- "Speed has been identified as a key risk factor in road traffic injuries, influencing both the risk of a road crash as well as the severity of the injuries that result from crashes.

- "Controlling vehicle speed can prevent crashes happening and can reduce the impact when they do occur, lessening the severity of injuries.

- "The higher the speed of a vehicle, the shorter the time a driver has to stop and avoid a crash. A car travelling at 50 km/h will typically require 13 metres in which to stop, while a car travelling at 40km/h will stop in less than 8.5 metres.

- "An increase in average speed of 1 km/h typically results in a 3% higher risk of a crash involving injury, with a 4-5 per cent increase for crashes that result in fatalities.

- "Speed also contributes to the severity of the impact when a collision does occur. For car occupants in a crash with an impact speed of 80 km/h, the likelihood of death is 20 times what it would have been at an impact speed of 30 km/h.

- "Setting and enforcing speed limits are two of the most effective measures in reducing road traffic injuries.

- "Studies suggest that a 1 km/h decrease in travelling speed would lead to a 2-3 per cent reduction in road crashes.

- "Experience in many countries has shown that the introduction of speed limits will only have a short-lived effect on reducing speeds unless accompanied by sustained, visible enforcement of these limits.

- "In some countries, speed limits are posted that vary according to weather, traffic conditions, and time of day. This ensures that speed limits are responsive to local conditions and traffic circumstances and are therefore more likely to be kept."

Mr Nicholson is fixated on the speed limits. He completely ignores roadway features on the highway that are designed to signal the presence of hazards even when driving within the suggested speed limits. They include signs about the changes in elevation, the escape lanes and the features to increase the frictional forces between the tyres and the roadway to reduce speed when travelling downhill.

WHO recommends that member countries set and enforce speed limits appropriate for the functions of specific roads. The law is definitely not an ass in the context of the speed limits for the toll roads. Wheel and come again, Mr Nicholson.