Russia and Cuba vow to expand their strategic ties 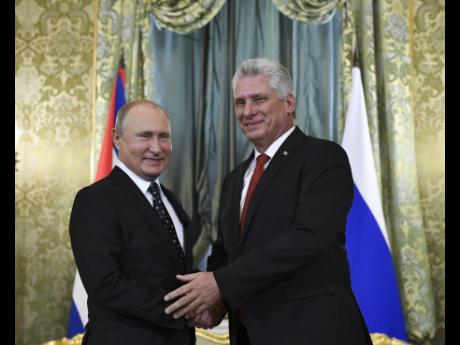 AP
Russian President Vladimir Putin, left, and Cuban President Miguel Diaz-Canel, greet each other during their meeting in the Kremlin in Moscow, Russia, Friday, November 2, 2018. Diaz-Canel is in Moscow for three days of talks aimed to expanding cooperation between the two nations. AP

The leaders of Russia and Cuba vowed Friday to expand what they called their "strategic" ties and urged the United States to lift its blockade of Cuba.

In a joint statement issued after their talks, Russian President Vladimir Putin and Cuban counterpart Miguel Diaz-Canel denounced US "interference into domestic affairs of sovereign nations" and spoke in support of closer integration between Russia and Latin American nations.

Diaz-Canel, who replaced Raul Castro in April in a historic changing of the guard in Cuba, hailed the "brotherly" ties between Russia and Cuba and invited Putin to visit next year.

During the Cold War, the Soviet Union poured billions of dollars in supplies and subsidies into Cuba, its staunchest Latin American ally. But ties withered after the 1991 Soviet collapse as Russia, hit by an economic meltdown, withdrew its economic aid to Cuba.

Putin, who visited Cuba in 2000 and 2014, has sought to revive ties with the old Caribbean ally.

Following the Kremlin talks, Putin and Diaz-Canel vowed to expand political, economic and military ties between Russia and Cuba.

Putin closed the Lourdes intelligence facility in 2001 as he sought to establish warmer ties with the United States during his first presidential term. But US-Russian relations have steadily worsened, plunging to post-Cold War lows after Russia's 2014 annexation of Ukraine's Crimean Peninsula, and the Kremlin has sought to rebuild ties with Cuba.

In remarks apparently directed at the United States, Putin and Diaz-Canel criticised the use of unilateral sanctions as a destabilising factor in global affairs.

The US economic embargo, initially imposed in 1958 and subsequently expanded, has remained in place. Russia, in its turn, faced an array of crippling US and EU sanctions over the annexation of Crimea and its support for separatist rebels in eastern Ukraine.

Putin said he and Diaz-Canel discussed expanding economic ties, including Russia's participation in the modernisation of Cuban railways.

The Russian leader also mentioned Russian companies Rosneft and Zarubezhneft tapping for oil off Cuba and a contract for the Inter RAO energy company to build new generator units at a Cuban power plant.