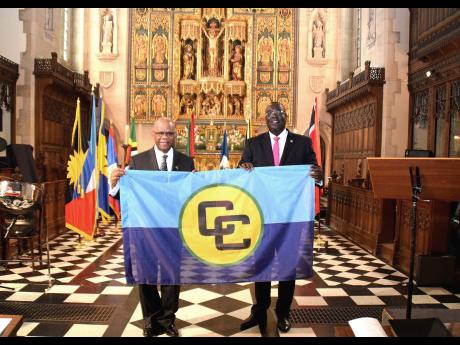 File
Jamaicas High Commissioner to London Seth George Ramocan (left) receives the Caricom Standard from Bocchit Edmond of Haiti, to mark the ceremonial handover of the chairmanship of the Caricom Caucus in the United Kingdom on July 4, 2018. Caribbean foreign ministries are seen as lacking a sophisticated approach in their engagement of the regions socially diverse diaspora.

For some years now, several smaller Caribbean governments have been interested in increasing the number of shared embassies overseas in which one ambassador jointly represents several nations.

The idea principally arises out of a desire to make cost savings when it comes to establishing a presence in second-tier nations, which, for political or economic reasons, a group of nations want representation in.

For example, OECS heads of government recently agreed to establish a joint embassy in Morocco and to reopen their joint diplomatic representation in Ottawa, albeit with no explanation or detail on how either embassy might operate or be financed.

Despite this, for most Caribbean governments, the idea of joint representation remains difficult to justify. This is largely because of their inability to agree on multiple foreign-policy issues, including relations with China or backing for Venezuela.

Ministers and diplomats also argue that in the absence of any Caribbean political and economic union, even the smallest nations continue to need to make their own case bilaterally, vote independently, and be able to address separately their own diaspora.

This suggests that for the foreseeable future, Caribbean states, including the overseas territories, are likely to continue to have their own independent voice in major capitals based on the underlying belief that only they can defend and promote their sovereignty, national prestige, and identity.

More significantly, the issue of joint representation may be hiding more pertinent questions about the nature of anglophone Caribbean's overseas representation and whether financial concerns about representation ought to be driving thinking about how small states leverage their international interests.

Most CARICOM foreign ministries are conservative, deeply concerned about the rules of diplomacy, and protocol ridden, with staff sometimes operating under constraints little modified from colonial times.

For the most part, Caribbean foreign ministries have not explored how many of the most powerful nations they need to influence have developed a multifaceted approach to diplomacy or how some smaller states have been able to push the diplomatic boundaries and find alternative ways to exercise political and economic pressure.

This and other factors have made most CARICOM governments' policy and diplomatic responses reactive. It has also resulted in failures to anticipate what is coming over the horizon and a diminishing understanding of who the not-always-obvious influencers and high achievers are who are able to change minds politically or administratively before decisions are made.

As new global political and economic centres of gravity emerge, there is a case to be made for Caribbean governments to review, individually, how they intend in future to deploy their limited resources in defence of their national interests and what might be done to create multiple new entry points to maximise their influence.

Much that is happening in the world today is driven by perception and public opinion. This requires governments and foreign ministries to think differently and to recognise the ways influence and opinion is now formed in North America and Europe, and to a lesser extent, China.

Positive outcomes are no longer always created in traditional ways. For example, despite years of polite exchanges, it was a single diplomat with good timing, acting through the media, who catapulted the appalling treatment of some in the Windrush generation into the national psyche of the British people.

This is not to decry traditional diplomacy, but to suggest that the anglophone part of the region might consider exploring several potentially potent tools that it has its disposal in Europe and North America.

First, there is the diaspora. Nothing engages communities, host governments, politicians, and the media more than when diaspora voters pursue country specific issues in a coordinated manner with their elected representatives or through the media and by other means. Despite this, governments, foreign ministries, and embassies have yet to develop a sophisticated approach as to how the voice of the region's now socially diverse diaspora might be consistently brought to bear in the best interests of individual nations.

Second, most Caribbean nations have parliamentary support groups within legislatures in North America and Europe. Despite this and unlike the groups that are related to Israel, Taiwan, or Turkey, they are not supported by funded secretariats able to produce regular or on-request briefing papers, nor are such groups used in any sustained manner to raise and promote issues and questions generated from capitals.

Third, there is the role of social media. One only has to look at the use made of Twitter, Facebook, and other social media by most governments to see the significance of developing supportive content and an integrated and systematic approach to messaging.

More significantly, there are newer ways emerging that governments will in future be able to utilise, should they wish, to find and address directly communities of support in key nations. The rapid growth of big data and artificial intelligence now make possible the identification of those in the diaspora or among visitors or business people who are likely to be active friends of a country or the region and who can judiciously be messaged for support.

There are also more standard approaches. The Scandinavians have roving ambassadors who, up to twice a year, visit the region for quite long periods with a well-prepared agenda of issues that are followed up in capitals where they and the region have substantial embassies.

There is also a range of institutions such as NGOs that some Caribbean diplomats have been reluctant to engage proactively out of fear that they may prove hostile. This is despite the often-significant levels of influence they have with the development agencies with which the region works.

Much more could be written on each of these subjects, but put simply, there are a growing range of tools, if well-coordinated and run by dedicated officers in foreign ministries, that could dramatically enhance CARICOM nations' clout on issues that matter at either a national or regional level.

It is not clear whether any foreign ministry or Caribbean academic is yet looking at how nations in the region might more effectively mobilise their case internationally or at the disproportionate influence that new approaches allied with more traditional diplomatic interventions might bring.

There is a case to be made for a radical look at how the region might better exercise greater leverage on those policy issues on which it requires positive outcomes.