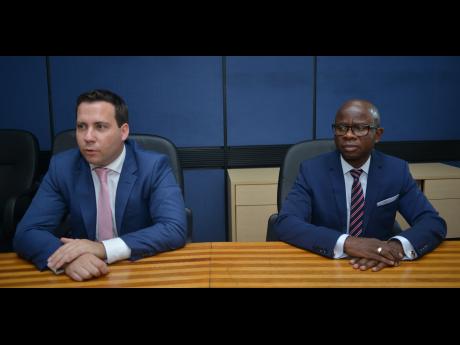 Kenyon Hemans
Co-managing directors of MPC Renewable Energies, Martin Vogt (left) and David Delaire speak about the company's investment plans at the offices of The Gleaner on Monday, November 12, 2018.

A foreign investor in Jamaica's largest solar farm under construction in Westmoreland will be floating shares on the Jamaica Stock Exchange, via an initial public offering likely by month-end, as part of a regional plan to raise US$200 million in capital.

But the German operators of the firm targeted for listing, MPC Caribbean Clean Energy Limited are not saying how much they plan to raise on the Jamaican exchange, citing regulatory strictures, until the prospectus is approved. They are also targeting bank loans, other financiers, and another regional stock exchange to raise the full amount.

The energy outfit is a subsidiary of MPC Renewable Energies GmbH, which has taken a one-third stake in the Paradise Park photovoltaic or solar project being developed by Eight Rivers Energy Company. The 51 MW project headed by Angela Rainford is costing US$64 million to develop, and MPC holds a 34 per cent of the Paradise Park solar project, said co-managing director of MPC Renewable Energies Martin Vogt.

"Overall, we're looking to raise US$200 million - a significant portion of which will come from development financing institutions rather than local investors in the region - and we're hoping to deploy that within three years, and we are certainly looking at Jamaica as one of our core markets," Vogt said in an interview with The Gleaner on Monday. The companies are owned by private equity firm MPC Capital.

Vogt said MPC Capital has been active in emerging markets, arranging financing for clean energy projects, its latest being a wind farm in Mongolia. Regionally MPC is involved in a wind turbine wind farm in Costa Rica and, in partnership with ANSA McAl, a photovoltaic plant in Trinidad and Tobago.

Fresh off a round of meetings in Trinidad, Vogt republic Martin confirmed that regulators had given the nod for MPC to approach the T&T Stock Exchange. In Jamaica, The Gleaner understands that JN Fund Managers will act as lead arranger for the IPO, according to sources. MPC and JN on Tuesday hosted a half-day forum on renewable energy, giving fillip to the information.

Vogt says MPC sees in the Caribbean and Latin American a region brimming with opportunities. He says MPC has been steadily building out its investment ecosystem for two years, and is working with a 10-year timeline to invest in 34 regional countries.

"We started with the investment platform in 2016 and since that time, we've been in business development mode for the region. We established a local presence with an office in Panama and another in Colombia. We have recruited the staff to deploy more capital in the region, and we have a project pipeline," Vogt said.

"Last year, we developed a special purpose vehicle through which we're channelling our capital - MPC Clean Caribbean Energy. Our investment platform is looking for more financing options and we want to get more investors on board," he added.

MPC co-managing director David Delaire says the Paradise Park solar farm is on track for completion in the first half of 2019.

The solar farm will deliver electricity supplies to Jamaica Public Service Company Limited at US 8.5 cents per kWh or US$85/MWh, the "cheapest" power sold to the grid in Jamaica, Delaire said. The company has a 20-year power purchase agreement with JPS, which is the standard contract duration for independent power providers selling electricity to the grid.

Vogt says Paradise Park is a long-term investment for MPC.

"Our investment vehicles typically have a holding period of 10-12 years and the project has a lifetime of 20-25 years so we are in it for the long haul," he said.

He said Paradise Park is typical of the rest of MPC's portfolio, with a payback period of 7-8 years, while the internal rate of return for the Jamaican solar project is an estimated 12-14 per cent.

MPC Clean Energy is looking to make other, more direct, investments in Jamaica, and intends to take part in request for proposals for 150MW of renewable energy projects.

"We believe that with our local knowledge, market understanding, technical qualification as well as financial power that we are in a very competitive spot to produce another project like Paradise Park. We are therefore looking for another 50 MW project for Jamaica and we're already in discussions with locals who want to partner with us based on our reputation working at Paradise Park," Vogt said.

MPC estimates that the Jamaican market can accommodate another 100 MW of photovoltaic power generation. Vogt also notes that since the launch of the Paradise Park project, the cost of PV panels has fallen by 25-30 per cent.

"With that we should be able to build a similar facility at 10-15 per cent cheaper," he said.