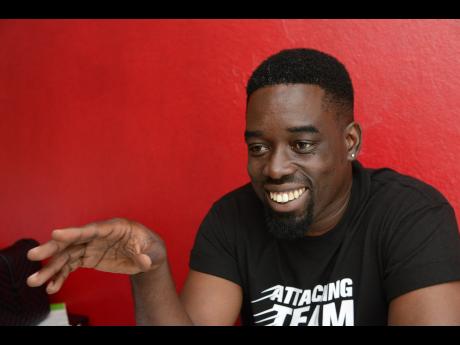 Rudolph Brown
Muse360 CEO Andre Burnett is known as a marketing disruptor. Now he is using his company to finance other disruptors and creative start-ups. 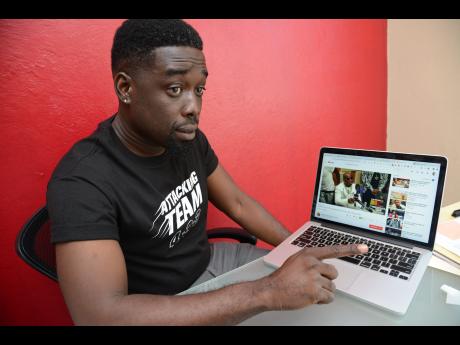 Rudolph Brown
Muse360 CEO Andre Burnett shows off some of the work he is engaged in, at the company's offices at the Seymour Business Centre, Kingston on November 9, 2018.
1
2

Muse360, a creative company founded by Andre Burnett, is carving out a different type of operation under which the agency operates as a financial backer of creative talents who become its business partners.

It wants to make the sector 'investible' in a market where banks and other financiers tend to avoid creatives as being too risky a bet.

The immediate avenue it's pursuing is a solution that Muse360 has adopted for itself venture capital financing, but with a different twist. Its own backer is SSL Venture Capital Jamaica, which took equity stakes in Muse360 and two other marketing companies four months ago in July.

"We decided to form a company that is literally made up of a lot of smaller companies, hence our venture capital model. So we were able to go into the boardrooms and provide big paydays for these people, keep them in a system, while at the same time giving them their own autonomy," Burnett said.

Muse360 was Burnett's conduit from a nine-to-five job to his own business.

He became a business owner partly to take advantage of an emerging opportunity, but also out of frustration that the employers in the creative sector he loves had failed to realise that their market was changing and that the talent that resided within it needed a different type of work environment that was not tied to a set workday.

He had 'fallen out of love' with creative advertising after working at OGM Integrated advertising for one year and then as creative director at The Lab for another five years.

"I thought that we really didn't have enough say in what happened. The marketing department of a company would call us and say what they want done; we'd hustle and submit something, which they wouldn't like, and we spend the next three frustrating weeks making changes. That simply saps your energy, quite frankly," Burnett said.

So he began freelancing, and it was in this phase of his career that Muse360 literally became a necessity.

He had piqued the interest of the owners of Campari liqueurs, who wanted to go mainstream with the brand. Campari was distributed to hotels and clubs, but they wanted to take it national and that meant adding rum bars as a new distribution channel.

"The first time Campari was reintroduced to the market, it was all about European ladies in flowing white dresses. That couldn't cut it in the Jamaican bar scene. My job, then, was to align Campari with the Jamaican audience without compromising what the product stands for," Burnett said.

His answer was a 'pop style' campaign, a series of eight events that would fuse Campari's style with the Jamaican dancehall and bar scenes.

"We didn't have a company and, of course, Campari couldn't deal with an individual so I had to form a company; but the novel approach was to have Muse360 spearheading and the other contributors pitching in," Burnett said.

That was last year. Since then, Muse360 has become much more.

Burnett and his colleagues are operating in a sector where the talent is more dispersed, meaning that more individual creatives are trying to commercialise their talent in areas such as film and animation, disruptive marketing, graphic design, content creators, videography, and other areas.

For that they need financing.

But the funding windows for creatives are virtually non-existent. So somebody had to get creative about a solution.

"The cost of doing business 10 years ago meant going to the USA and spending a huge amount on MacBooks and other equipment and to get a building to house machines and people. Now a small man by himself can save his money, buy a MacBook and all of a sudden he is an agency by himself," Burnett said.

"It's very hard to convince a top-notch graphic artist, or a motion graphics or videographer, to come and sit in your place for 10 or 12 hours when he can perform the same task sitting at home for three hours and get the same pay."

No shortage of talent

Having long realised, he said, that there was no shortage of talent, but rather the talent pool had become fragmented, with a lot of individuals working by themselves, Burnett had another epiphany Muse360 could become a financial conduit for ambitious creatives.

"My approach was to act as facilitator between talented, one or two-man shops, who have a difficulty dealing directly with people for all sorts of reasons and the customers who are demanding more and more for their dollar," Burnett said.

Rather than setting up a fully outfitted brick and mortar operation to do projects for Muse360, he co-opted the necessary talent, using what he described as 'a venture capital approach' in which he took care of expenses for entities that had ideas to execute but not the funds.

Burnett cited the example of a graphic artist who was agency-employed but wanted to strike out on his own. Andre Livingston had the idea of forming Lateral Media, a company that wanted to grow young artists and teach them advertising, while building brands at the same time.

"Andre had the big idea of building a lifestyle around recreational cannabis, since everyone else was concentrating on growing and exporting," Burnett said.

Muse360 gave Livingston financing to pay for his salary and four other graphic artists, an arrangement that they began putting together in February.

"We on-boarded them for salaries, but they operate like an agency within an agency. All I said to them is 60 per cent of your time should be spent doing our work and the other 40 per cent is your work. That is the essence of the venture capital model," Burnett said, while declining to disclose how much was invested.

Lateral Media is one of three start-ups that Muse360 has taken under its wings the others are Bangarang, which specialises in audio solutions for corporate advertising, and is referred to as a sonic development agency; and The Fix Productions, the company behind a YouTube programme called The Nightly Fix, which has 60,000 subscribers. Bangarang is owned by Paul Watson and Donald Medder, while The Fix is owned by Orane Hart and Ari Hammond.

Burnett says the arrangement with The Fix adds another element to his own shop content development while insisting that he wants Muse360 to be seen not as an agency, but a 'brand partner'.

"Social media, as it is now, is unsustainable as far as brands are concerned. A company can spend millions setting up a web page, adding and refreshing content and find themselves competing for eyeballs with a cut-rate production," he said.

"With Nightly Fix, we are giving them a critical mass that they can target."

Muse360 takes an equity stake in each company it backs, said Burnett, but he declined to disclose details of the deals struck with the start-ups.

At first, Muse360 was funding its start-up initiative with its own resources, but now the venture capital support it received from SSL Ventures at mid-year will facilitate the programme.

Neither party has disclosed the size of the investment by SSL, but the venture capital firm now holds 51 per cent of Muse360, Burnett said.

The arrangement will last for at least three years, but it is yet to be determined the means by which SSL will exit the investment. Listing on the stock market is one of several options under consideration, the Muse360 CEO said.